What is the opinion of Reddit about the
Yama Glass Siphon Vacuum Coffee Maker, 20-Ounce, Clear? 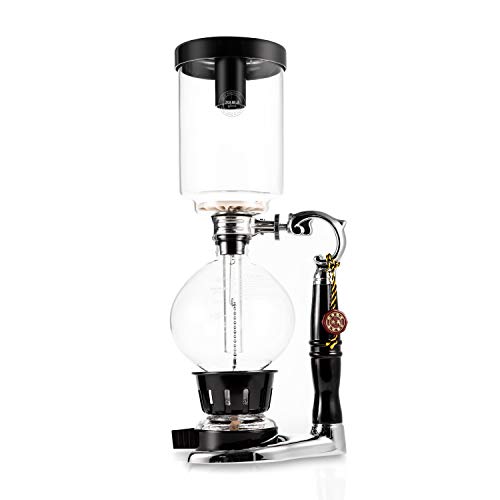 Not only do I make siphon coffee (weekends, when there’s time — it does take longer), but the Yama siphon in the video is the one I own:

It DEFINITELY makes excellent, noticeably different coffee than a coffee maker or a French press. Also, it’s not nearly as difficult as the dude in the videos seems to be making it out to be. If you like drinking coffee, and you can find a coffee siphon for sale at a decent price — that Amazon link has it for about $80 — I would definitely have to say it’s worth it.

This is the Vacuum Pot that is used. Any Bunson style burner should work. https://www.amazon.com/Yama-Glass-Tabletop-Siphon-Alcohol/dp/B002CVTKTW/ref=mp_s_a_1_5?keywords=vacuum+pot+coffee&amp;qid=1576713183&amp;sprefix=vacuim+pot&amp;sr=8-5

Ooh, let me know how that Hario is.. I LOOOOVE my chemex, but I’m always looking into new methods of delicious coffee brewing. I’m debating getting one of these: http://www.amazon.com/Yama-Glass-Tabletop-Siphon-Alcohol/dp/B002CVTKTW

But I don’t know anyone who has actually used one IRL. I’m trying to find some place near me who does it so I can watch and sample the coffee before totally committing.

Also I’m so jealous your dude works at Peet’s! There are two local roasters near me that I love, where I usually get the beans from:

If you guys are ever interested in branching out and trying new roasters, I can recommend a couple of REALLY good beans/blends. I also know that both of these places will ship bags of whole beans like the day they get roasted, so it’s worth a shot if you’re not near their HQs.

I have a Northwest Glass TCA-5D, and I think it was well worth the $70 I paid for it.

-Start with good tea, with a few selections per type. The comments on this thread are on target. I would also suggest some teas that are dramatic in terms of steeping. Think Blooming Teas, like this from Adagio, or the use of bricks of pu erh.

-When it comes to Tea Preperation, up the Theatrical. Use a samovar as suggested elsewhere. How about a Cold Brew Tea Pot that looks like a part of a laboratory? Or better yet, how about a Siphon/Vacuum Sealed Coffee and Tea Pot?. The major point is you want take the customers on a journey, and to include them in both their education, and entertainment. Make it fun, and interactive.

-For Steampunk, you probably would want to focus on English style service, so I would suggest getting English style bone china (or similar) cups and service pieces. Think about investing in a fancy silver plate set for display. I got my for $100, and it looks EPIC.

-Include Tea infused foods, and small things that pair well with coffee and tea. This thread, but think earl grey cookies and black tea biscotti. This can also be as easy as serving a small salad with tea infused vinaigrette.

-Price your tea in tiers, to encourage the drinking of POTS (with multiple cups) versus a single cup. Encourage exploration of flavors, and suggesting different types of tea depending on the time of day, customer mood, and food pairing.

For your needs, I would focus on cup, pot, and cream. And possibly Afternoon if you feel adventurous.