What is the opinion of Reddit about the
V-MODA XS On-Ear Folding Design Noise-Isolating Metal Headphone (Matte Black Metal)? 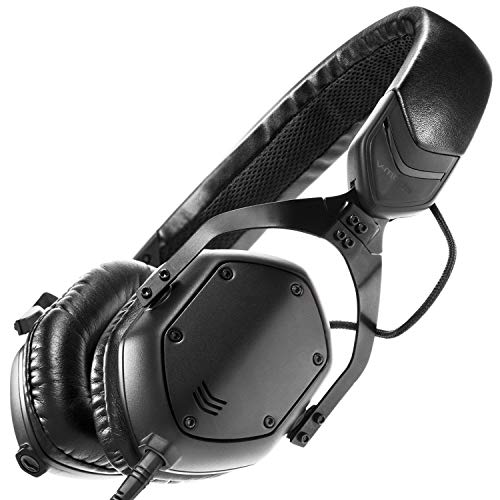 There is the option of THESE.

This would give me the same sound (or close to), for a little over budget.

if you wanna pay $150+ on a bassy on ear headphone, at least get something with decent build quality: V-Moda XS

If “flexible” covers going to 145€, the V-Moda XS have outstanding build quality, very comfortable (and will further adapt due to memory foam pads and the fact you can change the clamping force by bending the steel headband), and I think will fit perfectly for the kind of tone you described.

For v-moda, xs is the newer version of the m80 that can fold and has slightly improved sound. this thing is built like a tank and should be fine for the gym. and I like the sound of these better than the momentums.

2.0 is also the newer version that folds, and has deeper earpads than 1.0.

Both of these are warmer than neutral but i find the XS and M80 better in all aspects. The XS is available on amazon for 139-149USD depending on color right now

Not exactly what you are looking for as they are on ear, but I’d suggest you check out the V-MODA XS. They are just a little over your price range (170).

Isolation is solid, though not perfect. They are fine for on the plane or bus, although I do find sometimes walking around that there can be some rather annoying wind noise, even with the cord inside my shirt.

Unusually for on-ears, these are damn comfortable cans. It will take a few weeks, but it will get to the point that you will forget you are even wearing them because they are so light and form fitting.

You don’t provide a lot of information about your sound profile preference, but the XS have a sound that is on the warm side of neutral, without an overly dominant bass or treble. If you are a bass or treble head, you may find them disappointing on that front, but otherwise the sound is excellent. The bass is nicely detailed, and the mids are fantastic. The treble can lack the sparkle of other cans though, so bear that in mind.

I think they may definitely be up your alley.

Beats Solo2 are 133 Euro at Amazon.de…pretty good match for your needs.

they feature a bass heavy sound without being bloated or muddy and have very good portability. I personally prefer the V-Moda XS due to better comfort and build quality, but those are 180 Euro.

If you despise the beats brand (which I’d understand):

In that case I’d be inclined to recommend the Vmoda XS which is warm and was actually on sale during black friday at $126?

Alternatively the Beyerdynamic DT1350 is the more balanced of the two and isolates more than the XS.

I’d prefer the DT1350 but the XS has the more consumer-friendly sound.

How do the V-Moda XS compare to the Sennheiser Momentum 2.0 On-Ears?

I’m planning on using them unamped with a Samsung Galaxy S4 or plugged into my computer.

My music is a combination of hip-hop/rap, r&b, pop, and ‘indie’ music.

Alrighty! I think I can roll out some recommendations, in that case.

Given your criteria, the first thing that comes to mind for me is the Beyerdynamic DT770 ($169.99 via Guitar Center). Famed among musicians and music lovers both, the DT770 is well regarded for its build quality, high comfort, and strong bass. The v-shaped sound signature gives it quite prominent highs in addition to its boosted bass, at the cost of fairly recessed mids. It is arguably the strongest option for your preferences as you’ve expressed them.

I am, however, a big fan of options, so here’s another one: the V-Moda XS ($199.99 via Amazon) is a strong contender if you like a much more bass-centric sound and the on-ear form factor. The XS is massively portable, contra the very stationary-usage-oriented DT770, but its on-ear design will put significantly more pressure on the ears and almost certainly fall in comfort compared to Beyer’s “ear pillows”.

A third option would be Audio-Technica’s ATH-A900x ($149.00 via Buydig), which is very well-regarded for its soundstage and gaming competency. I sadly lack a FR plot (or any meaningful measurements at all) for this headphone, so I can only rely on subjective analysis on this one, but it is said to have a more neutrally-tuned v-shaped sound than Beyer’s, or Audio-Technica’s own M50x, giving them an enjoyable but more accurate character. The isolation of the A900x is one of two sticking points, as it is said to be fairly mediocre, with the second being the fit issues some users (mostly those with smaller heads) have with the “head wing” suspension system Audio-Technica uses. I quite like the wings myself, but if you have a small head, getting a good fit may be hard for you.

A fourth, slightly atypical option would be Hifiman’s HE–400. One of the cheapest of the planar magnetic/orthodynamic headphones on the market, the HE-400 retailed for $300-400 when it was in production, but has since been phased out by Hifiman, though some stores still have it in stock ($250–$300 via Razordog Audio, depending on how you feel about open box). The HE-400 was long lauded as one of the best EDM headphones of its price class – and, indeed, many consider it to be superior for EDM to its more pricey and otherwise superior successor, the HE-400i. Though a new HE-400 would be out of your price range, they often pop up on Head Fi and /r/AVexchange for $220ish. The HE-400 is certainly not without flaws – it requires a fair amount of power to drive, possibly necessitating an amp, depending on the quality of your integrated, and it is regarded as mediocre in comfort at best due to a fairly high weight – but it is one of the most acclaimed headphones out there for the genres you’re interested in, and it hews much closer to your target of “neutral but with bass” than competitors like the V-Moda. It would be the most work of the four to acquire and use, but it might be worth it.

Here is a frequency response graph of the four aforementioned headphones (with the exception of the A900x, whose older equivalent, the A900, stands in), along with how to read the chart, if you’re unaware. As you can see, the V-Moda is the bassiest, the Beyerdynamic has the most treble, and the other two are closer to a neutral target, though this might leave the A900x in particular too neutral for your tastes.

If you have any questions, I would be happy to answer them to the best of my abilities.

Source – My Laptop and iPhone 6.

Requirements for Isolation – Some would be preferred- I’m buying these assuming my roommates next year will be very noisy and plan to use them to get some piece and quiet. Also plan to use them outside, maybe.

Preferred Type of Headphone – I would like on or over ear

Preferred tonal balance – I listen to a lot of different music, so an balanced overall sound is a must.

Past headphones – This will be my first pair of headphones.

I have been looking at a V-MODA XS, and Audio-Technica ATH-M50x and am leaning toward the V-MODA XS. Can anyone provide some recommendations?