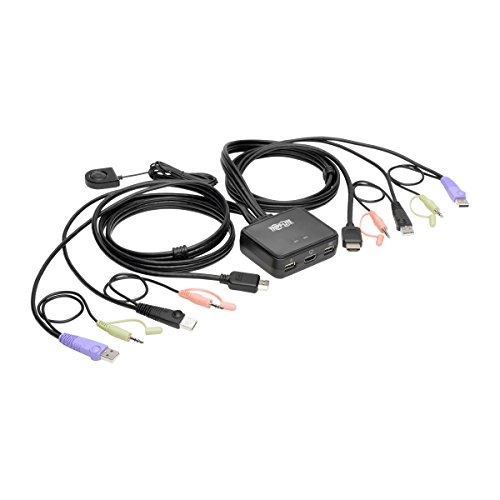 Any chance that both computers have USB-C? That’s probably the only way they would be able to use the same dock connection. It should be pretty easy to use one plug to connect all your monitors and such through that.

If not, your best bet is probably to setup a KVM switch between them. I’ve recently setup this one between my work laptop dock and personal laptop that’s been working pretty well. I have one monitor, keyboard, and audio connected through it, but separate mice.

For the second monitor I just connected separate inputs to each computer. When one computer boots the monitor recognizes and switches if the other computer isn’t on. This allows me to switch it separately (just with the monitor buttons), which is useful to leave up music or something on my desktop that I can’t stream through my work VPN. There are also more expensive KVMs that can do multiple monitors if that would work better for you. You could also stick with one monitor in the center and place the laptops on either side as the second monitor.

You should be able to make any monitors work with the right KVM and an adapter or two. I’ve got HDMI coming from one computer and DP from the other and it’s been working fine.

Alternatively since you aren’t using both computers at once, just connect separate monitor inputs to each one (or each dock) and get a bluetooth mouse and keyboard. You should be able to find ones that can pair to multiple computers and connect to whichever is available. The monitors will switch to whichever display is active.