What is the opinion of Reddit about the
Stoplight Sleep Enhancing Alarm Clock for Kids (Boy Car Clock)? 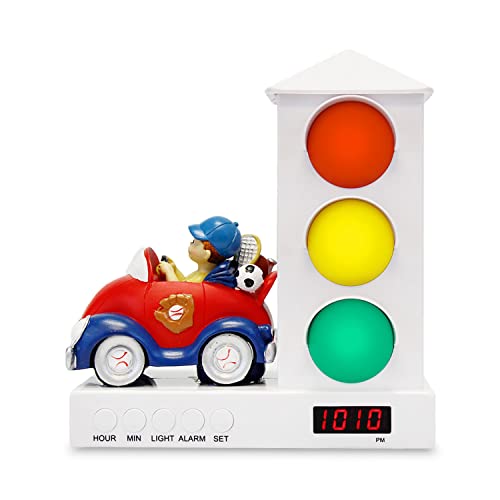 The reality here is that he is 4, and it really sounds like you should have a conversation with your partner (one in which they don’t get defensive). That being said, my wife and I were on the same page and wanted the kids to sleep/stay in bed later…

If its red, stay in your bed.

The clock we got was this off of amazon. And yah, she’s 4 so she totally still needs a steady structure. Free range parenting just doesn’t fly well for kids on the spectrum since they need so much all up in the face learning. I hope the interactive schedule works well and you find the incentives she’ll respond too!

I got this one and another one light it. They are AMAZING!! They have them on eBay also. They work with battery or plug in, I suggest the plug in. I liked that there was no alarm, so they could sleep in if they needed it. They LOVED that green meant go and I didn’t have to take them back to bed. Stoplight Sleep Enhancing Alarm Clock for Kids, Red and Blue Sports Car https://smile.amazon.com/dp/B002TKLN46/ref=cm_sw_r_cp_api_glt_fabc_410QG81XA2KRNBJ2FZKH

So we had the same issue of kiddo thinking it’s time to get up. Someone here linked me to this and we’ve been using it since he was two and it’s worked pretty well!! ESPECIALLY at first.

You set the time and when it hits whatever time you set, the red light turns green. And we harped on “red means stay in bed” and “green means it’s time to get up!”

He was totally into it and he learned how to turn on the lights himself really fast. He’s almost three now and he always gets super exited to show me “it turned green!!!!”

It’s a bit pricey but I’d say it’s well worth it. We hit a snag about six months on but we kept at it and it’s totally awesome. They don’t know time and this helps them a lot. Plus, they can’t argue with the clock!!!

both my kids have one of these. You can have a night light on or off. It does stay red until it turns green, but it’s a battery back up/outlet situation, so you could put it on a timer and it would work.

This was a life saver for my first born: