What is the opinion of Reddit about the
StarTech.com 16in (40cm) 9 Pin Serial Male to 10 Pin Motherboard Header Slot Plate – motherboard Serial Port Adapter (PLATE9M16), Gray? 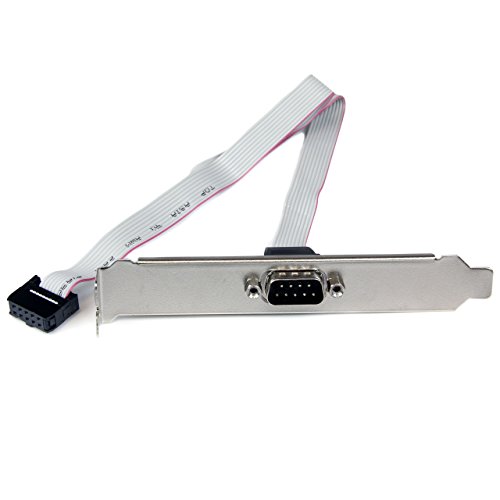 I had read that these connectors for serial port headers are the correct pitch, but I don’t know whether the number of pins or pinout are a match. It’d sure be convenient if they were.

I might just try ordering a couple ribbon cables, just for laughs. But i don’t now if they are A or B type.

Alright, after talking with you in the comments, here is my first draft of the build. If you want to change the motherboard and case size, need a dedicated GPU, or other items, that can be discussed.

My first go around I prioritized getting an 8 core CPU that had integrated graphics. This was so you can get a very strong CPU, but since you said the graphics were simple, I’m hoping integrated graphics (iGPU) in the CPU are good enough for the program. A dedicated graphics card (GPU) would provide better graphics performance, but the GPU market is freakin’ crazy right now, with high prices and shortages everywhere. You’re budget of $950 USD is low in the crazy GPU market, so I am hoping you can avoid that market all together.

CPU: You said the program is CPU intensive, so went with the cheapest, modern, 8 core CPU that had built in integrated graphics.

Memory: 16 GBs of DDR4 RAM at 3200 MHz CL 16 are the base specs for RAM these days. Considering you’re using an older XP machine with less than 4 GBs of RAM, this is a massive upgrade.

Storage: The new SSD form factor and type, M.2 NVMe drives, have now come down in price to cost the same as the older SATA SSDs, so I picked a 500 GB one like you wanted. These M.2 NVMe drives attach directly to the motherboard. For this specific build, do note that the M.2 NVMe drive will only work in the second M.2 slot on the microATX motherboard I picked. Also, 2 TB HDDs were only $10 more than a 1 TB HDD, so I picked a 2 TB HDD.

Case: Since I picked a microATX motherboard, I chose a medium size microATX case. This can be easily changed to a mid-tower ATX case if you want.

Got you Windows 10 Pro, and also found an adapter to allow you to add a serial port to the computer.

Has anyone seen a pcie bracket for the com port that is rj45 instead of db9? Similar to this, but rj45. https://www.amazon.com/StarTech-com-1U-Rackmount-LCD-Console/dp/B001Y1F0HW

Looks like you might be right. I set my server up with enterprise hardware which came with graphics support without the need for a GPU or iGPU. I did some digging into the board and thought that you might be able to achieve everything through the onboard COM header and a serial connection.. I’ve read some advice that this won’t work but I find that difficult to believe. IF you’re technically minded this might be a route you could explore:

The unclear part would be how to enable serial connections in the bios without the monitor. It does seem like an easier solution to just buy a cheap GPU though.

If you were to get this working, you could install the OS, and PMS via terminal – i.e. from another computer you’ve connected to the headless server. You could use terminal screen or PuTTY to connect.

Most high end motherboards still have them as headers on the board itself, but don’t put them on the IO pannel. check your manuel, and if you have one, throw one of these in your pc. if not get one of these instead.