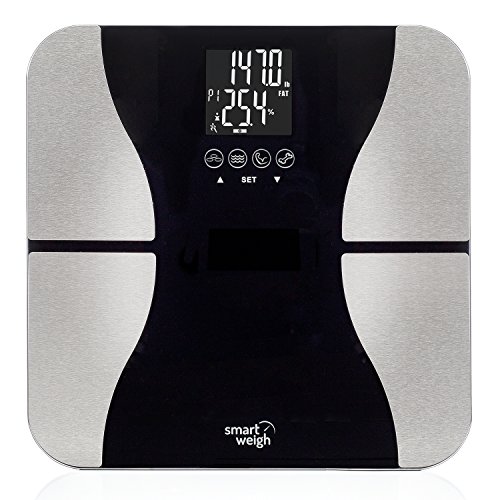 This is the one that I bought … https://www.amazon.com/Smart-Weigh-Precision-Tempered-Recognition/dp/B00M8FXDIQ/ … and I’d buy it again. It’s quite consistent between weighings and has a solid feel. I’ve used it for 2+ years now.

The BIA is useful, but not calibrated between methods. You’d probably get different numbers from the various methods of body composition testing. What’s useful is that they give you numbers where you can see your progress. I use Libra and record my weight and body fat percentage every day and look at the 7-day averages.

I have the Smart Weigh Body Fat Scale. I can’t comment on its accuracy as I’ve never used another method to actually capture my BF% to compare it against. However, my goal is not accuracy. My goal is tracking, and it gives me numbers to track and overcome which is all I really want anyways.

I got an awesome deal on this scale that measures body fat %, water, muscle mass and bone mass. It’s a little more expensive than what I got it for on a lightening deal but still worth it.

> what is your guys’ thoughts on those fancy electronic fat% measuring devices.. Do they work and if so any recommendations on one?

They sorta work. It’s a lot like judging a pond by its surface. Anything that’s not bone or muscle is counted as fat — including waste, water, inflammation, etc.. Since you’re doing a lot of resistance training, I’d get one anyway because it’s useful for seeing your progress through trends … this is the scale I have http://www.amazon.com/Smart-Weigh-Precision-Tempered-Recognition/dp/B00M8FXDIQ/ and it’s very stable with its BF% reading — which makes it useful for the deltas between readings.

This is the one I bought http://www.amazon.com/Smart-Weigh-Precision-Tempered-Recognition/dp/B00M8FXDIQ/ and it seems rock solid. Very consistent displays, solid feel to it. The batteries lasted about 8 months of use of about 10 times per week (two of us losing weight in the family). 100% would buy again.

It’s kinda cool that TOPS is your only scale.

I dressed for TOPS last Tuesday night. My home scale showed I gained 1½ pounds. I drove to TOPS and weighed in ½ pound lighter. Okay, that was a pleasant surprise, but what if it was the opposite? I would have been bummed.

Personally, I keep two sets of records — my morning ones and my TOPS one. My morning ones look like an EKG or some volatile stock. My once-weekly TOPS ones are more like a downhill ski slope — definitely more encouraging.

This is what I bought http://www.amazon.com/gp/product/B00M8FXDIQ/ and it’s very good. It does the body-fat-% which really mirrors the weight graph pretty closely (since I’m not body building, this is not a surprise).

This is the one that I use… http://www.amazon.com/gp/product/B00M8FXDIQ/ … it displays a body-fat% that might not be accurate when compared to other scales or calipers (I don’t know, I’ve never calibrated it against these other methods), but it is useful for seeing your own progress.

I have a SmartWeigh scale that does body fat/bmi/etc and have been happy so far. As far as I can tell, the biggest benefit of the Aria is that it links directly to your FitBit account and auto logs your stats. I did try a different scale from a well known big-box store and returned it the same day. After stepping on it 3 times, I got 3 different weights that had a 5lb swing between them.

I really liked that it has a little light scale on the bracelet itself that shows a visual representation of how much activity you’ve gotten in that day (like, % of goal shown in bar format – for example, imagine these asterisks are lights:

Also, the app lets you sort of compete with your friends. You can see their step totals in comparison with yours and playfully taunt each other. I easily get sucked into numbers games (goddamn cookie clicker) so this is something that would make me wanna work out more.

Plus, she doesn’t use the function but I found out today there is a sleep tracking aspect to it as well, and the battery lasts for 5 days without recharging.

They also sell a scale that can link up to the fitbit and update all your stats automatically, but it’s $120 or something and I don’t want to spend that on a scale. Instead I’m getting this smart scale and am going to put my stats in manually.

a few days ago and it’s coming in on Friday (im so excited)!

I was trying to get: https://www.amazon.com/gp/product/B01N1UX8RW/ref=ox_sc_act_title_1?smid=A1WXKQ3NWKC8WT&amp;psc=1

But however it wasn’t available for Canadian Amazon so i got the one above instead.

This one gives the same readings + a bit more however you need to download an (free) app with it. This one is ~$28 USD

… is the one that I bought. It does do BF% and other measurements via bioimpedance and while I don’t know how calibrated it is, I’ve found the BF% to be a consistent and useful gauge of my progress. I record and graph (on Libra) both my weight and my BF% daily.

I would buy this scale again and suggest it with confidence.

Cripes, sorry. Here it is!

This is the one that I bought…

I think I paid nearly $40 for it. 10/10 would buy again. It remembers the age, height, and sex of up to 8 family members and automatically picks who is weighing as long as they’re 10 lbs. from one another. It just stores those 3 things — It doesn’t remember the measured data, so you have to write it down or remember it yourself (since I track weight and BF% I just remember it and walk in to the other room and log it).

This is the one that I bought — http://www.amazon.com/Smart-Weigh-Precision-Tempered-Recognition/dp/B00M8FXDIQ/ … and it’s $40 right now — look around as I’ve seen it a bit less expensive.

This is the scale that I own … I see that it’s only $29 from one of Amazon’s other sellers so shop around. I really like it and would totally buy it again.

This one http://www.amazon.com/Smart-Weigh-Precision-Tempered-Recognition/dp/B00M8FXDIQ/ is the one I have — best scale I’ve had. Very consistent.