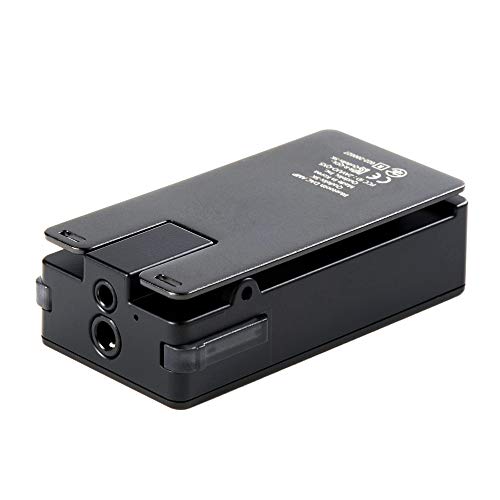 Consider splitting the difference with the qudelix 5k. If you can use it balanced it’s almost as powerful as the zen dac and you can use it on the go as well.

I think it’s worth the cost over the tempotec

Maybe you could cheat. Using an adapter like this one

Just out of curiosity… how do you break your wires? I haven’t had a wire problem since I started getting headphones with removable wires.

> There is no way of knowing for sure though right?

Well there is, you just need a LDAC receiver that indicates the bitrate it is receiving: https://www.amazon.com/Qudelix-5K-Bluetooth-Adaptive-Unbalanced-Balanced/dp/B088F7C976/

I have one and through the app, it displays the LDAC bitrate. I just did a test now where I set the LDAC bitrate to Audio Quality (990kbps) in the Developer Settings on my Pixel 4 and then walked around away from my IEMs and it held steady at 990 kbps. Then I switched it to adaptive and watched it go up and down.

The Qudelix 5k bluetooth/amp/DAC has an app for both Android and iPhone with parametric EQ built-in. So you would have complete EQ control of your headphones. https://www.amazon.com/Qudelix-5K-Bluetooth-Adaptive-Unbalanced-Balanced/dp/B088F7C976

Qudelix-5K would work great with them and also give you the option of using it as a Bluetooth receiver with them without connecting it to your tablet or phone.

That HD-DAC1 looks sweet, Marantz do make beautiful (and expensive) gear. I’ve never properly auditioned one of their amps myself. Nor do I expect that it would make enough of a difference in subjective performance for me to “need” something like that.

Both the Aiyima A07 and Topping stack are great. I especially love having reasonably big volume knobs within arms reach at the desk, and the switches for L30; off/headphones/pre-amp and low/no/high gain. I do use the Topping stack mostly for the speakers these days, ever since I picked up a Qudelix5k for portable headphone amplification, built-in PEQ, and its hands-free calling capability. A bonus is that the Qudelix5k works swell also with my TV over Bluetooth, if I want to watch or play something without disturbing anyone else. My primary set of headphones are the Hifiman Sundara, which also sound amazing.

The Aiyima A08 seems to be the same amp as the A07, with added USB/Bluetooth DAC and built-in power supply. I especially avoided those amps and DACs with Bluetooth due to the inability to switch Bluetooth off, and that pretty much any device could pair with it, indiscriminately.

I’m not aware of any good low-cost amplifiers with 3 channels, which would be perfect for your setup. I suppose if you have a way to split the audio signal, just using two Aiyima A08 or A07 would suffice. Could even bi-amp the center speaker with its own A07.

A proper receiver may be the best and simplest all-in-one choice. An alternative that granted is a bit fiddly, and total cost may not be worth it, would be getting an SPDIF to analog converter (e.g. 6x RCA) and an additional amp (e.g. A07) for the center speaker.

To switch between two amplifiers with one pair of speakers (or vice versa), there are cheap switches available. Here’s one of the cheaper ones I found (as long as you don’t have crazy thick speaker wire).

Perhaps it’s time to get rid of the Wharfedales and pick up a pair of headphones as an alternative?

> We are so sorry to inform you that after a test of the BTR3K by our engineers, we found that it is impossible to achieve EQ adjustment in LDAC currently.

I imagine that it’s the same problem as with the BTR5:
> The data stream of LDAC audio is relatively large with a high sampling rate, but the DSP built-in CSR8675 inside the BTR5 has limited ability which aims at handling EQ adjustment under low sampling rates. In addition, the default audio channel recommended by Sony does not pass through DSP.

It’s a shame, but to be honest APTX-HD isn’t that much of a downgrade for on-the-go listening.

We should have got the Qudelix. I believe this can EQ LDAC.

Then again, the BTR3K looks a little smaller.

I wish it was available lol

How’s the price on this?