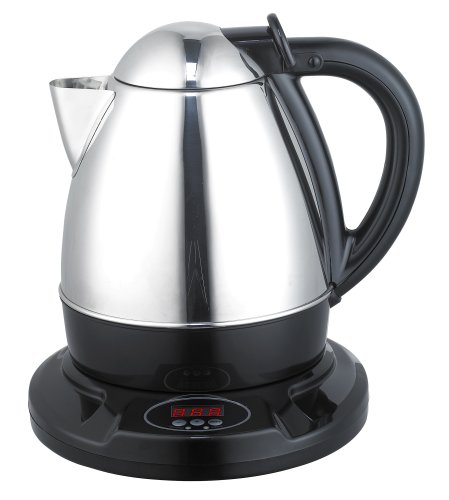 I got this PINO model, which has apparently disappeared from Amazon. Rather annoying that it’s not available, because it works fine for me.

The Pino Digital Kettle is pretty nice too. Have you measured the actual water temp in your Cuisinart? The Pino tends to drift upwards past the set temp and I’d love a kettle which gets you to exactly the temp you input.

I have the Capresso and I have also never had the smell, but let me give you other reasons to not buy one. First of all, the design of the kettle makes it so that pouring from it means your hands are directly over the steam and it is very easy to burn yourself. Second, it has no thermometer built in. Third, If you ever fill it above the 3 (or 4) cup mark, despite that being well below the ‘max’ line, you will find that you have hot water pouring out the top of it while it violently boils. Fourth, it is a pain in the ass to clean; I’ve taken to boiling vinegar/water solutions to do so, but you have to do it nearly every time you use the thing to keep it looking nice and the top is narrow enough to make it hard to clean the inside. Mine, after less than a year, has developed an intermittent leak at the bottom (where the heating element, glass, and silicon gasket come together) that seems to have something to do with temperature; luckily, they designed the plugged in base in such a way that there are drainage holes so that it doesn’t screw itself up. Finally, it has no ‘keep warm’ setting.

What I’ve switched to was pricier, but I’ve been much happier with it. I should mention it seems that some people have had problems with theirs, but mine has been at work and has been heavily used for nearly a year now by many people and it hasn’t had any problems. The only complaint I have is that if it is empty (or too low) and left on it will continue to heat until it overheats, shuts off, and then makes a constant angry tone until you unplug it and let it cool. They’ve made some changes to it since I bought mine, maybe this is fixed.

So I was actually thinking about getting this, after your suggestions and doing a little bit of searching.

Looked good, after reading the comments I’m not so sure about the plastic parts. The Pino seems to do everything I — being able to set specific temperatures and no plastic. Hopefully it works out ok 🙂