What is the opinion of Reddit about the
Omega Paw Self-Cleaning Litter Box, Pewter? 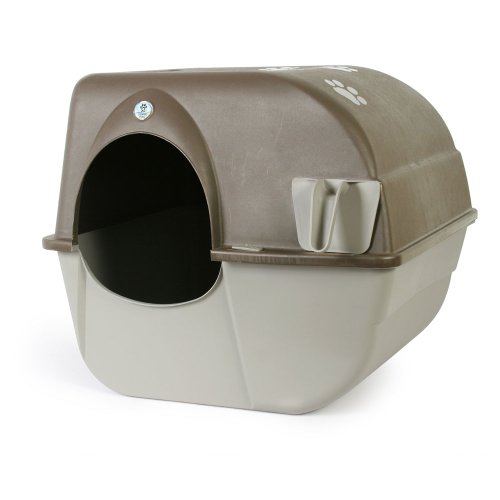 
A total of 28 reviews of this product on Reddit.

I don’t know if this is quite as big as what you are looking for, but this is what we got for our boy, and we really like it so far.
http://www.amazon.com/gp/product/B005E2S77C/ref=oh_aui_detailpage_o07_s00?ie=UTF8&amp;psc=1

It definitely makes cleaning easier, and I could see how it would be nice for a multi-cat house. But like I said, I’m not sure if this is quite as big as what you want. Might be worth a look though!

This is the one that I use. The first thing I do every morning is clean the litter box and I have nothing but rave reviews for this particular litter box.

I bought one of these and it broke so fucking quickly. Even when it did work, half the shit missed the tray it self-scooped into and just fell onto the floor. Extremely regrettable purchase.
I have 5 cats and this is the litter box that I personally use. This isn’t an ad or anything (lol) but I really love this box so I tell everyone about it! It’s not completely self-cleaning (its not a robot, you have to roll the box onto its side and the clumps fall into a drawer) but you don’t have to do any scooping either. I recommend them to everyone, I bought 4 myself.

Exactly right on both points. It seems like overkill, but 1 box/cat is totally worth it to avoid issues.

Get a couple of these. Takes 10 seconds to clean out a day’s worth.

Since it looks young, you can get pet insurance really cheap (we use Nationwide) and they can help with the cost of shots and all that stuff. Basic coverage is like $17 a month or something.

Also, another person mentioned scooping the litter box every day, and I recommend that as well. Or you can get this awesome litter box in the Amazon link below and all you have to do is roll it over slowly and all the clumps fall into a bin. Roll the thing back over and empty the bin and you’re done. No scooping for poop. Oh and don’t waste your money on a litter genie. Get a Tidy Cats 35lb litter pail, and when it’s empty, just put the poo in there. Congrats, saved you money.

We use good clay stuff because we got a special litter box that you just roll over to scoop it. Handy as fuck.

Slowly turn towards its side, then continue until it’s all the way flipped over, maybe tap the bottom in case some litter is caked on teh bottom, then set it. All the bad shit is filtered into a scoop that pulls out and you dump it in a bag.

To be fair there isn’t a screen between her and the waiting room.. her desk is off to one side. She did start out nice about Al being loud, but her expectations of little kids is too high. She did say nice things at first, and then proceeded to get worse about it. She did say “aren’t you going to do something?” And huffed whenever Al climbed on top of the chair and I was holding Levi….. I wanted to snap at her, but I refrained because I really like my dentist.

We’ve been thinking about getting something closer to this ( https://www.amazon.com/dp/B005E2S77C/ref=cm_sw_r_cp_apa_IOVDxbBGGG8XW ) for the litter box because of space… I dunno. She only does this with fresh litter. It could be month old nasty litter and she won’t do it… the clear storage box would be cheaper but we have no wear for it to go.

>Note that we only accept orders from Canada. If you want to have your order delivered to Yukon,
North-West Territories, Nunavut or Nunavik, please contact us to make delivery arrangements.

I use this which is pretty fuckin’ sweet (and way cheaper).

We found this litter box to be very useful. Our guy has been an only cat most of his life and he likes it that way. I work from home so could interact with him a lot during the day. A second cat may help if you aren’t going to be there a lot of the time. Ours had his rambunctious moments when young (lost count of unrolled toilet paper rolls), but since they are pretty sensitive it seems fairly easy to train them (I’m on my 3rd ‘Blue) if you are consistent. Get the sticky paws tape early on so he doesn’t pick up furniture shredding habits. I used the same tape on countertops when we went away and he learned to stay off kitchen surfaces quickly. We’ve never fed him “people” food so he has no interest in sampling stuff he shouldn’t be eating anyways. I do regret not leash training him.

I bought a litter box from bed bath, its called like Omega litter box. It is a cover kinda round shaped box with half of it with litter and the other half empty with a strainer in between. When you need to empty it out, you roll the poop to the strainer that saves the good litter and separates the chunks. The chunks then fall into a hole where a little drawer is. You put the box upright again and take the drawer out. Voilà, its clean. We do this twice a day, replace all litter once a week, and rinse it out every two weeks. The pee doesn’t get a chance to settle to the bottom.

I’m a big fan of this litter box. Once a day you roll it to the side, the clumps go in the tray and the litter is strained. No moving parts, electricity, filters, etc.

We have three cats. Using two enclosed boxes that are cleaned every day and a low-dust litter keeps the smell away.

We have two of these boxes:
http://www.amazon.com/Omega-Paw-Self-Cleaning-Litter-Pewter/dp/B005E2S77C

You tilt the box and the clumps fall into a drawer, so it’s easy clean up. So awesome not using a scooper.

As tempting as the lightweight litter is, I don’t recommend it. There’s so much dust that you can really always smell it. Try the low-dust version; I think we use Tidy Cats.

My husband has really bad allergies, so we also have an air purifier in the computer room (the litter boxes are in the closet, we removed the door and put a light curtain up). So this also helps, but the smell was already nonexistent before we bought the fan.

There are fancier, more expensive ones than this, but I used to use this one with my previous cat: http://www.amazon.com/Omega-Paw-Self-Cleaning-Litter-Pewter/dp/B005E2S77C

Unfortunately, I haven’t been able to use it for a while, because my current cat refuses to transition to it from a regular box. He’s a big guy (about 17 pounds and twice the size of the previous one), though, and the opening is a tight squeeze for him. He can fit through it, but only with some awkward maneuvering. We have an attached garage that we don’t keep any cars in, so his box is there now and the containing the smell isn’t as critical as if it was in our living space.

For anyone looking to make their life way easier with the litter box business, get one of these. It’s motherfucking magical. I’ve barely scooped that thing in the year since I got it.

We use omega paw litter box with tidy cats multi cat litter (having two cats). It keeps the smell at bay (we clean it twice a day (but it’s super fast and easy to do) and have a mat infront of it to stop the litter.

Start out with a normal litter box, definitely. That storage box is way too high. If after she adjusts to the normal box, try something like this, which may or may not work out for your cat.

Cats in general like to see around when they’re doing their business. They also like to have/need to have an escape route.

Try meeting your kitties needs and she should be much happier 🙂

Also I’m slightly worried about the two animals sharing a box. “A disease seen in ferrets called Ferret-FIP that is similar to Feline Infectious Peritonitis (FIP) The virus that causes this disease is found in many cats and normally only occasionally causes a transient diarrhea. The virus is carried in the cats saliva and feces. The virus does not seem to be as infectious as was first thought and will not survive long outside the host, is killed with disinfection agents.”

I’m still being under 100$ if I recommend this one:

Sure, something like this: https://www.amazon.com/Omega-Paw-Self-Cleaning-Litter-Pewter/dp/B005E2S77C. It looks like you still see the clumps at the end, but it might be easier to shield your eyes to some degree if it’s all in one go?

This litter box is the best thing I’ve ever gotten. https://www.amazon.com/dp/B005E2S77C/ref=cm_sw_r_awd_WO1jvb1DM8NKC

Sorry for no link but this works really well for me. No more scooping!

She has this it’s not too small. Cats are weird
Omega Paw Self-Cleaning Litter Box, Pewter https://www.amazon.com/dp/B005E2S77C/ref=cm_sw_r_cp_api_AUm0xbHCBYASY

The problem for multiple cat households is that even for a self-cleaning litterbox, you’re supposed to have two.

Also, if a litter robot malfunctions, which they can and is the reason refurbs are always available, you need a backup.

Instead, for my two cats, I setup three litter stations in three closets with cat doors and night light and an air purifier (three opposite corners of the house), two of these boxes per litter station: http://www.amazon.com/Omega-Paw-Self-Cleaning-Litter-Pewter/dp/B005E2S77C/ref=sr_1_6?s=pet-supplies&amp;ie=UTF8&amp;qid=1455691492&amp;sr=1-6&amp;keywords=litter+box

I found that rubbing the boxes when new with a block of food grade paraffin wax made them stick-proof and clogs all the pores in the plastic, so I only have to dump the litter and clean with bleach every 2 months.

And with six litter boxes, they are fool-proof and more than sufficient for 2-days (even though I roll the used ones daily).

I have one of these litter boxes, and holy shit is it awesome. Our dog can just be tricky.

maybe get a litter box that has a cover on top, its harder for litter to splash out

i use this one for my kitteh
http://www.amazon.com/Omega-Paw-Self-Cleaning-Litter-Pewter/dp/B005E2S77C

Okay. Maybe I’ll try just a manual sifting type one, like this:

Well then have someone else clean the litter box! We use this litter box, and it WORKS. Who ever thought of this is a genius. http://www.amazon.com/Omega-Paw-Self-Cleaning-Litter-Pewter/dp/B005E2S77C/ref=sr_1_3?ie=UTF8&amp;qid=1339598475&amp;sr=8-3&amp;keywords=cat+box