What is the opinion of Reddit about the
NAD – VISO HP50 (Black)? 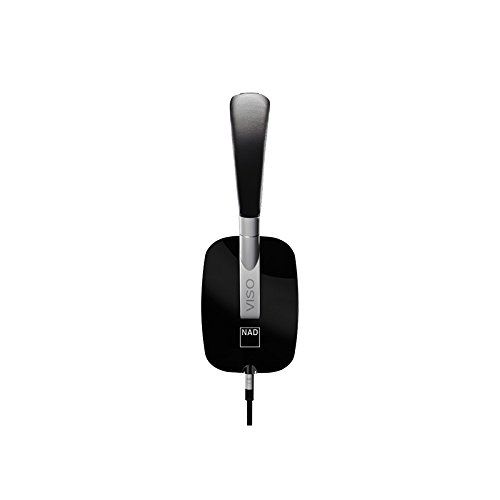 NAD HP50 are very close to your budget. Also compatible with the V-Moda BoomPro if you want to improve their headset capability later (they have a mic included on the default wire too).

I use a set of NAD Viso HP50 and I’m super happy with them. Great bass but balanced overall really well with a surprisingly great soundstage for closed headphones. I don’t use an amp because they’re driven fine from a non amped source (Surface Pro).

I bought them without demoing since nobody best new carries them. It was a risk but I did it based on reviews.

Check out the NAD VISO HP50.

It’s a solid all-around headphone with a balanced, if slightly warm sound signature that’d suit your genres well and is very easy to drive.

If you’d like headphones that lean more towards the critical listening side of audio and don’t mind open-backs, the Sennheiser HD600/650 are often in that price range, although you’ll need an amp + DAC to drive them to their full potential.

It sounds like you’re looking for the NAD VISO HP50 to me. They emphasize the bass but they don’t skimp out on the rest of the range, they’re good looking and comfortable, and they’re right inside your budget at $300 (They’re $250 in the US, so I thought I had found you something good, sorry!) Either way, they seem to fit your needs well as closed back all-rounders, so I’d look into them. Unfortunately, they don’t really benefit from expensive amps, but I don’t have enough experience with them to know whether they benefit from any amp or not, so I’d assume that they’re good either way. I hope you find the headphones you’re looking for!

Op is there a referral embedded in your link? You may want to change it to

Also, the price has been at $249 on Amazon since the beginning of August, looks like it is the new normal for the HP50

Came into some money so I’m reposting with a higher budget.

Recently I have been looking at the Viso HP50’s but nothing else has come up. I know it’s a lot of requirements, but does anyone have any suggestions?

Sorry about the P7.

Here’s one you haven’t heard: How about the NAD Visio HP50?

MSRP was $300 in 2013, but today you can get a pair for $150 on Amazon. Tyll from InnerFidelity proclaimed to love them and apparently they are super comfy and work perfectly when powered by a phone.

Hey guys. I’m looking for some new closed back headphones for around 200-300$ CDN. I want to be able to use them on the go.

Budget – 200-400
Source – My desktop, laptop and phone
Requirements for Isolation – I’m planning to use these on the go a lot, as well as at home, so isolation is pretty important to me.
Will you be using these Headphones in Public – Yep
Preferred Type of Headphone – I think full-sized? Something that goes around my ear.
Preferred tonal balance – Strong highs I think. I listen to all genres but having great quality in my Rock/Metal/Jazz songs are really important.
Past headphones – I currently have Sennheiser HD 558s. They’re 4 years old. My main issue with them is the sound leak, lack of portability and occasionally muddy sound.
Preferred Music – I listen to all genres, but like I said earlier getting clear instruments in metal, rock and jazz are the most important thing to me.
What would you like to improve on from your set-up – I think I’m looking for stronger trebles and highs.

Location – I live in Toronto, Ontario, Canada. This means that a lot of US Headphones are going to be a bitch to get past customs, and our conversion rate isn’t so strong.

Despite this, I’ve been able to identify a few headphones that I might consider. I’m mostly looking towards the cheaper ones though…. and especially the AKG and Audio Technicas:

https://mezeaudio.com/products/meze-99-classics-walnut-silver-wood-headphones (This one comes up to being waaaay out of my budget though, so only if it’s truly the best)

I have these NAD VISO HD50s and they work great

Always have a seller comment on your thread prior to making the transaction. This shows that the user hasn’t been banned.

Also, not hardware but… a pair of Nike Lunarglide 6 Photosynthesis UK 12 , barely wore them. Only £50

Sending everywhere or meeting in London.

Also, not hardware but… a pair of Nike Lunarglide 6 Photosynthesis UK 12 , barely wore them. Only £50

Sending everywhere or meeting in London.

No, those are Premium, not Pro. They have an open back and will have very poor isolation.

are you set on on ear or over cans? If not, then you can find some stellar IEMs with the budget you have set, and you get no sound leakage and great isolation. If you are interested in IEMs let us know and that will greatly open up the recommendation list.

Otherwise, I would suggest looking at the NAD VISO HP50 Since I purchased one a year or so ago, it’s been my go to headphone for commuting and for use on the go. It isolates well and has a great warm sound signature with slightly rolled off highs and good bass that is ever so slightly emphasized, and make a nice contracting headphone to the HM5 (which I also own).

A very similar headphone to the HP50 (and also designed by Paul Barton) is the PSB M4u-1. Very much worth looking into for portable use as well.

The Westone Adventure Alpha’s would be great for portable / commuting use too, as they are super durable, and are water resistant.

Take a look at the Mrspeakers Mad Dogs. (or Mad Dog Pro if you want some more bass)

I picked up a pair a while back after doing a ton of research and demoing other units. I couldn’t be happier with how they sound!

Here are my thoughts on them.

Images to go with the review.

And if you haven’t already, be sure to read Tyll’s review of them over at InnerFidelity.

The interview Jude over Head-Fi did with Paul Barton is worth a watch as well.

Oh, and Lachlan even likes them.

After months of use, including carrying them back and forth to work, I have zero complaints. I really do love these headphones. Comfort for some is not so great (due to the squarish earcup design it would seem), so if you are looking for that sound, the PSB M4U 1 is very similar, and the same cost, with an oval earcut design that fits people better in some cases. Same cost on Amazon as well, $249.00.

Try to get these… 4694
http://www.amazon.com/Electronics-Noise-Isolating-Over-Ear-Headphones-Black/dp/B00E1UVXHO

I would strongly recommend saving up an additional $49.00 and get yourself a set of the NAD VISO HP50. They simply do everything and they do it well. I use my pair for movies and a lot of netflix watching in bed. No sound leakage which is nice, because it doesn’t wake my wife. I also listen to a wide variety of music / genres and the HP50 keeps up with all of it. The best part, they are very easy to drive of any source.

The only downside is that a few people had fit issues due to to the squared of ear cups. It needs a good seal to sound its best, and some find that the lower part that hits their jaw breaks that seal. Its not that common, but worth noting. Buy from Amazon and return if needed. Alternativly, the PSB M4U 1 is pretty much the same sounding headphone (same driver, same designer, and PSB is NAD’s parent company). Being that it has an oval shaped ear cup, the fit issues tend to go away.

Take a look at the NAD VISO HP50: http://www.amazon.com/Electronics-VISO-Noise-Isolating-Over-Ear-Headphones/dp/B00E1UVXHO

the NAD VISO HP50s are a great isolating pair of headphones with a warm neutral sound signtaure great for vocals: http://www.amazon.com/Electronics-VISO-Noise-Isolating-Over-Ear-Headphones/dp/B00E1UVXHO

Interesting. If I’m understanding the theory correctly, you’d either need to add a preamp exclusively for that, or manage to overdrive the normal amp, which is unlikely in this circumstance. An additional issue is that solid state amps are prone to “hard clipping”, which is typically much less popular than the “soft clipping” distortion which you may be familiar with on tube amplifiers. This said, I’m operating purely on theory here, and asking somewhere like Changstar, Head Fi, or Gearslutz would be more likely to get an answer from someone who’s actually tried this.

They’re not all that common, I’m afraid. Most audiophiles aren’t concerned with mics, so most headphones leave ’em out.

Oh man, that’s unfortunate. Can you cancel the orders? I am 95% sure that I can get the price back down to the $1,600-1,700 range, and that’s a not insignificant amount of money to save, whether or not it goes into headphones.

You are only about 50% correct, here. Some of the nicer headphones – Oppo PM-1 and both the Focals, for example – don’t need an amp at all, while some cheaper models you might consider actually would need one. While the need for an amp drops markedly below the $250 mark, there’re still some fine higher-end headphones that don’t need one.

Really depends on what you define by cheap. The ATH–MSR7 is $212, which is a goodly ways below the Focals and the Oppo and such, while the Viso HP50 is $300, which is pretty close to a Mad Dog and an amp or one of the Focals. If you’re trying to stay below $250, options would include the AKG K550 ($155), Audio-Technica ATH-A900X ($144), maybe even a Shure SRH 940 for $195 if you trust Rakuten, though all of those’re gonna fall short of the HP50 and MSR7 in most circumstances, much less the Focals and the PM-1. It ultimately comes down to how much it’s worth it to you to spend, really.