What is the opinion of Reddit about the
Melitta Pour Over Coffee Cone Brewer & #2 Filter Natural Brown Combo Set, Black? 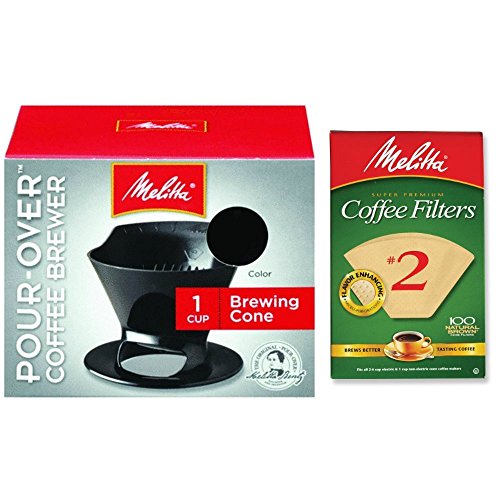 Ahhh I’ll have to start doing that!

The drip cup I’m talking about is a reusable one. You get one and you’re good for life basically. Just need to use filters like you do in your pot. But I swear, it has a better flavor and consistency (thicker) than pot coffee. I like pot coffee, but it doesn’t beat a pour over .

You can use the same filters you use for your coffee pot. I do, and it works fine.

I’ve only got one pourover so far. It’s a “wedge style” (just learned today) and it’s okay, though it takes a while to finish. I think it’s because the one we have is ceramic with pretty smooth sides, so when the filter paper becomes wet, it seals everywhere except for the very bottom.

I’d rather switch back to a basic plastic pourover dripper (we used to have this one but I’m not sure why we got rid of it) or something else like a Clever or a Kalita Wave.

I was referring to this one, though I bought a couple of them for $2.88 each in store, and the filter are usually 3-4. No idea why it’s so expensive on amazon.

Oh, it looked like a pod machine when I searched. Not sure where you are and what model you’re considering. Sorry about that. I’m just not aware of any Oster coffee maker that’s been tested to get water hot enough to make good coffee.

Maybe a kettle and something like this would be easier and make tastier coffee?

If you’re used to drip coffee, I can’t speak highly enough of the melitta pourover cone. It’s cheap, requires zero to no skill (the draw time is slow enough that even extraction is almost guaranteed, I’ve had cups almost as good as those made with the V60). Plus, filters are everywhere and cheap. Also clean up is close to zero as well: drop the filter in the rubbish bin and rinse the cone under running water.

Aeropress. Here things get more interesting (and slightly more expensive too). It needs a bit more fine tuning to find your preferred recipe, but it’s my to-go coffee maker. Reliable, versatile, and easy to clean. It will (generally speaking) give cups that are slightly more bodied than those from pourover/drip but still very clean.

Moka Pot. The Bialetti ones run a bit more expensive but odds are you can get similar ones for a lot cheaper. That’s the coffee I grew up with and I’m not a big fan of it, even though I have a small one for when I want something similar to espresso. You can do like your standard Spanish/Italian family and just pour water, coffee and put on your highest burner setting until the coffee stops coming out, but this will inevitably give burnt-tasting, over-extracted cups. However, if you pay enough attention (ETA: which is done by following the indications given down in the comments) you can get quite a good brew, stronger than drip but not quite espresso. Cleanup is a bit more annoying but still nowhere close to a French press. Also, the first three/four cups will taste like crap until the top chamber starts to get an oil buildup, so remember never to use soap (ETA don’t do that) on them and rince the top chamber with water once you’ve poured out all the coffee.

A gooseneck kettle makes pourover far easier, but it’s not a requirement and other brewing methods don’t care one way or another. If you already own a kettle whatever you have will work. If you are going to buy a new kettle, I would recommend getting an electric one; they’re often faster than heating on the stove, and you don’t need to turn on the stove 🤷‍♂️ more expensive ones often have an adjustable thermostat, but even a cheapo $10 electric will turn off once it boils.

French press is probably the easiest to make and the most annoying to clean (not really hard, but compared to be pourover it’s noticable.) Glass ones are more attractive IMO, but you can get stainless ones that aren’t breakable and are sometimes insulated.

The pourover options that are more popular among coffee enthusiasts, like V60 and Chemex, tend to require a lot of attention; it’s the trade off for being able to control pretty much all the variables. However, they’re not the only options for pourover.

If you would prefer to use less mental energy at 4am, you could use an older drip pourover instead, since they control the flow rate instead of you. I have a Melitta that still makes pretty decent coffee, and I sometimes choose it for its simplicity despite owning other devices. I’ve also heard good things about Clever Dripper (kind of a FP/Pourover hybrid), though I’ve never used one myself, and I believe it can be used as a normal pourover if you want.

The fresher ground the coffee is, the better. Any coffee is better than instant coffee, though, so even pre-ground off the shelf is a step up. Some grocery stores also have a grinder in the coffee aisle to grind whole beans right there. If you get beans from a cafe or local roaster they’ll usually be willing to grind it for you as well, and have a pretty good idea where to grind for whatever device you say you’re using (bonus: really good grinder)

A grinder is a good addition to a coffee setup, but I am gonna say that there’s no need to rush into it. You and your wife are just starting to make and drink coffee (dipping your toes, so to speak,) and while it does make a difference, there’s no reason to preemptively throw your wallet at it.

If/when you decide you want to grind at home, I would just skip the cheapo grinders. You can make decent coffee with an inexpensive grinder, but it’s going to be a huge limitation at that point because they have trouble giving a consistent, even grind.

Link to Straining Equipment (this makes straining so much easier)

Link to filters (BROWN ONES!!) Dont use WHITE

UPDATE: you can find both of these items at your local Bed Bath And Beyond Store! At my local store I found them even cheaper than Amazon, and in stock same day!

Note, I have zero affiliation with these products, they are just what I use every day. I almost gave up on tea making due to difficult straining. IF you run into frustration from the straining step, go take a run over to your local Bed Bath and Beyond and I can almost guarantee this will help so much

I believe this one is wider than 4″

You can also set, like, 2 chopsticks on the mug and then put the dripper on top of that. Or something similarly fashioned.

I simply leave the V60 in the cabinet and use this a Melitta instead.

I’ve tried and quite regularly use V60, Melitta cone, Aeropress, and Moka Pot.

In terms of ease of learning and using, nothing beats the Melitta cone and the filters are everywhere. Plus, it’s usually very cheap. The brown ones you get in the grocery store can taste a bit papery if you don’t rince them consciously. Still, it won’t take more than five seconds of your life. It makes for a slightly more bodied brew than other pour over devices but odds are that I couldn’t distinguish it from a V60 in a blind taste. If you like playing and tinkering, though, it is not the funniest brewer all around. Nail the coarseness and water temperature combination to your taste (coffee should be ground fairly coarse) and bang, good coffee every time.

Aeropress is also very easy to use and allows for a lot more playing than Melitta cone. You can grind very find and infuse for a short time for a bit more body, ground coarse and infuse for longer for a bit cleaner brews (my favourite), and play with adding more or less water at each time, stirring more or less… Even though, once you’ve nailed a recipe it’s pretty easy to replicate, which is useful at 06:00. If you’re anything like me, any time before 07:30 I’ll be doing things from muscle memory alone.

Moka pot is a strange thing for me. That’s the kind of coffee I grew up with and I didn’t believe it was possible to make good coffee out of it. It looks pretty uninvolved (dump grounds into container, put it on stove and wait) but you should pay a bit of attention to it or it will come overextracted, bitter, and nasty. As the filter is metallic and there is a tiny bit of pressure involved, it is a rather bodied brew which is somewhat close to espresso. Still, the ratio is pretty much determined (you can take it off the fire pretty quick and pour it when there’s still water in the bottom chamber for a more concentrated brew but that’s about it). If you want a heavier brew, that’s your best option. Still, clean up is relatively annoying compared to the options above.

V60 is the king of tinkerers. Plenty of options abound to make wildly different brews. Still, it demands a lot of work on your side and drinks are difficult to replicate, compared to the devices above. If you value clarity but versatility and don’t mind paying a lot of attention to what you’re doing, go for it.

Chemex: never tried to use it nor tasted its coffee so I’ll have to pass here.

French press: Not a big fan of its big body, as I find it muddles up the flavours. You can scoop away the oils (see Hoffman’s method) but still, I’m not that convinced. Plus, cleanup is rather annoying and you’ll almost always end up with grounds in your pipes. Not good long term.

I’m willing to bend an ear on the Japanese fedishisim, but you are DEAD wrong about the Malita comparison. Malita is a lot closer to a Kalita wave. It’s a partial immersion method. Furthermore, the Malita isn’t any cheaper than the V60.

Ditch auto drip coffee and start making pourovers. I drink pourover coffee every day. Only takes a few minutes to make and I find it therapeutic.

And I also recommend an electric gooseneck kettle it makes life so much easier.

If you’re looking for making like 3 cups of coffee at once, you could get a larger sized french press, or a Cheney if you prefer the filtered taste. Just be cautious with the chemex, I broke my antique one while washing it 🙁