What is the opinion of Reddit about the
Klipsch RP-600M Reference Premiere Bookshelf Speakers – Pair (Ebony)? 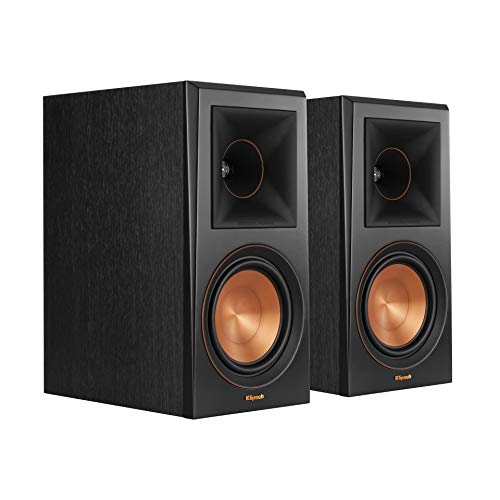 Assuming you’re using your PC/PS5/Xbox to feed the projector:

You’ll need an AVR at some point to support anything above 2-channel audio, if you don’t already have one. The cheapest one worth getting is probably the Denon AVR-S650H. 5.2Ch, room correction, all the stuff you want. You can get a refurb unit direct from Denon for $329.

You can get a pair of wireless speakers like Sonos or a home-theater-in-a-box kit, and they’ll be a lot better than the projector, but they tend to be kinda throw-away and mediocre quality compared to even a cheap pair of decent bookshelf speakers driven by an AVR. Nevermind the subwoofer: there are no all-in-one systems, wireless systems, or soundbars that have a decent subwoofer. None.

In terms of media players I’ve gone to the dark side with the Apple TV. It’s really just the best one, especially now that they fixed the stupid remote. I’ve also started buying movies on iTunes. Of all the movie streaming services it’s one of the best in terms of quality, not to mention you get free 4k HDR upgrades to stuff you’ve already bought if they become available. Some services make you buy HD/UHD separately.

Speaker wise if you’re on a budget and don’t have a gigantic room, the Micca RB42 are really really excellent for the price. I had a pair of Klipsch RP-600Ms in my bedroom, which are awesome ($500/pair but now down to $377) and I replaced them with the Micca RB42 ($150/pair) because they were much smaller. I really don’t miss the Klipsch. Without direct A/B testing I think most people would be hard pressed to pick them apart. The Klipsch get louder and dig a bit deeper but unless you want your ears to bleed they are more than fine.

You can get the RB42 L/R and center for $250 all-in. Or the OoO series L/R and center for $160 all-in. If you want surrounds just pick up another pair of the the bookshelf speakers from whichever set. The usual wisdom is that surrounds can be super cheap as they have much lower requirements. Which is mostly true but sound mixes nowadays incorporate music and whatnot on surround channels so it still helps if they’re decent. In a pinch you can even use the Covo-S for surrounds at $50/pair.

For subwoofers that’s where the real money comes in. The most expensive components by far in my HT system are the subs. Even more than the projector. You can get Klipsch subs under $200 which will be way better than nothing but still way down on the totem pole. IMO the BIC PL-200 is the cheapest one worth getting if you can swing it, but none of these will go down to 20Hz with any authority which is typically what you want for a home theater sub. To do that you’re looking at $500-$600 to get into the low end for true HT subs that’ll dig down to 20Hz. It’s a fair chunk of change but if you can ever swing it I guarantee you’ll be grinning like an idiot.

Above that, the sky’s the limit. JTR, SVS, HSU, Rhythmik, PSA are the heavy hitters in the subwoofer space. FWIW SVS has by far the best customer service and return policy. They also do a 45-day in-home trial. You can order any speaker/sub and return it within 45 days. For any reason, no questions asked, and they pay for shipping both ways. SVS are excellent but in terms of price-to-performance they’re middle of the pack. If you ever get into the true monster subs you’ll be leaving SVS in the dust. All that to say if you want to just experience what a true HT sub sounds like, you can just order one from SVS and return it after a month for zero cost.

Anyway, wow that was a lot of text. The great thing about home theater is you can take it at any pace you like. If you’re really on a budget, I’d say the priorities should be:

For <$600 you can take care of the first three and be way ahead of any pre-packaged system or wireless system. If you’re really on a budget, look at something like a pair of powered bookshelf speakers such as these. Edifier has some good choices. Most have bluetooth and RCA/optical inputs. You can either hook up directly to your PC or you can use an audio extractor in-line with the HDMI cable to your projector and take audio from there.

This might set up a Redcoat / Colonist dispute, but consider Klipsch RP-600m‘s.

First of all, that is a fantastic cap-coupled amp. One of the best ever made, according to some. It puts out less than 30 watts, so I’d pair it with efficient speakers. Herb Reichert, of Stereophile, himself owns the Klipsch RP-600’s (not expensive at all! 96dB sensitivity! https://smile.amazon.com/dp/B07G3D2C8S/ref=dp_cr_wdg_tit_nw_mr

This guy has heard just about every high end speaker that there is (read: speakers costing as much a nice car) and yet these are speakers he uses in his own home! Less than $500 a pair.

If it’s the amp that’s crackling, thoroughly clean the controls with CRC Electronics cleaner, followed by Deoxit Gold to maintain/lubricate the pots. I just restored a 555A and the switches and pots needed a lot of cleaning before the sound started to come back. It also needed a full recap (replacement of aging aluminum electrolytic caps).

Best value under $300 new IMO is the Fluance RT82 $299 when back in stock at the end of the year. It has auto stop and then an optical sensor speed controlled servo motor for low wow and flutter and speed variation. OM10 cartridg is a bit better than the newer version 2M Red. Pass on the older RT81 that along with the RT80 lacks the new speed sensor. Pass on the RT83 since the cartridge is not any better. Pass on the RT84 and RT85 since you can get a better turntable for those prices.

Music Hall are made in the same factory as Pro-ject and a good value when on sale:

Floor standing towers then you don’t need to build or buy speaker stands:

Hello! I’m looking to upgrade my (very) dated handmedown college setup. I have about $800 to spend on speakers and a new receiver. Currently, I have a ~30yr old denon receiver with Wharfdale Diamond 9.2s and two polk psw10s (I know, sacrilege, but they were cheap on marketplace for the time). My two main uses are music listening and movies.

My idea is to get a 5.2 receiver so that I have room to add speakers to my setup as I go. Right now, I’m looking to upgrade my front speakers and possibly add a center. I’d move my Wharfdales to surrounds and look to upgrade the subs sometime next year. I have a hard drive of FLAC, but I also use Spotify. Movies are mostly streamed through a Nvidia Shield. Right now, I’m considering these two options:

I’ve been able to find them both at less expensive prices to equal about $800. Just wanted some additional input on if there’s something else I should look at for the money, or if I should re-prioritize what I’m upgrading (I’ve seen some people preaching about prioritizing upgrading polks asap). I actually like the Wharfdales, so part of me could be talked out of upgrading them now, but I’m itching to change something up. I also have two speaker stands for the fronts. Thanks!