What is the opinion of Reddit about the
Klipsch R-15PM Powered Monitor – Black (Pair)? 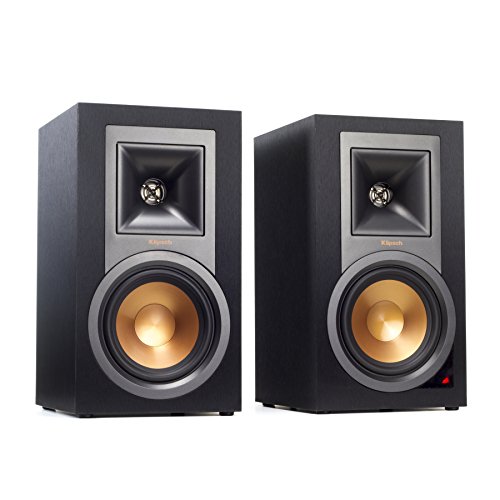 
A total of 33 reviews of this product on Reddit.

Bought it used and it didn’t come with the speaker wire. Amazon gave me a $75 partial refund which is great bc I’m sure I can easily find cheap wire. The right speaker sounds great at least

They’re actually pretty cheap because they’re discontinued (to be replaced by a not much better model). They’re the Klipsch R-15PM, and you can find them for $250 nowadays. https://www.amazon.com/Klipsch-R-15PM-Powered-Monitor-Black/dp/B01A7J534G The sub is a Klipsch R-12SW, which is around $200. It’s good for the price, but it doesn’t go suuper deep.

Get some bookshelf speakers and a receiver or pick up some powered speakers and use those. Sound bars are garbage. I use the Klipsch R-15PM and love them, there are many cheaper options out there as well.

As I said above, bare minimum recommendation would be a $50 phono preamp and $100 Edifiers. I’d recommend jumping up to some Klipsch R-15PM’s instead. Better speakers and they have a built-in phono preamp. For ~$350 you get RCA inputs, AUX in, Optical in, USB in, Bluetooth, a subwoofer out, and a remote all in one package. Literally just need a turntable and R15PMs for a complete setup. I even have a Chromecast Audio connected via the optical input and I can cast music from my smartphone as well. It’s a damn fine all-in-one speaker setup.

Hi audiophiles! I got a turn table for Xmas and wanted to get speakers to do it justice. I picked up a pair of the Klipsch R-15PM’s. I just finished setting everything up and I am a little disappointed in the high end. I played a pretty old copy of Freebird and a brand new EP from Brothers Comatose (new bluegrass). Both of them sounded very clear, but just seemed sort of flat, and I think its because the highs just weren’t coming through.

Are these speakers not great, or are my ears just spoiled from listening to music with the loudness blown out of proportion?

I’ll give it a shot. The turntable is your audio source. The way it works is that a stylus (needle) runs along the groove of a record, and the vibrations of that needle are converted into an electrical signal that outputs from the turntable. That electrical signal is very weak, and is also—due to the nature of how vinyl recordings are mastered—compressed in a way that makes the low end of the signal (bass) weaker than the higher end (treble). Because of that, a phono preamplifier is required, to boost and equalize the electrical signal to what is called line level; this allows the signal to now be further amplified to a listenable level, without introducing too much additional electrical noise. Now that line-level signal has to continue on to an amplifier, which—as the name implies—further amplifies that signal, and sends it on to the speakers, which convert that amplified electrical signal back to vibrations that travel to your ears as (presumably) music. So, in summary, a typical chain of components would be: turntable –> phono preamp –> amplifier (either a stereo receiver or integrated amplifier) –> speakers.

Thanks for the help, I was looking at these and it looks like it comes with a remote. I’m fairy certain the TV has a headphone jack, so that seems like a pretty straightforward setup, unless there’s something I’m missing…

You could grab these as they already have a phono stage built in. Only downside is that the volume control is on the back 🙁

Phono ready, Optical and USB in and bluetooth. Won’t give you surround for movies though.

I’m a fan of Edifier’s budget systems, but they’re not really monitors.

The LSR305 excels as a studio monitor and JBL’s DNA endows it with high efficiency and room-filling power. Unless you need the extra features of the Edifier, I see no reason to choose it over the JBLs.

You might want to consider the Klipsch R-15PM. All the features of the Edifiers, greater power and efficiency than the JBL, and subwoofer output.

Look no further! They got everything you need in a bundle if you scroll down, no discount though 🙁

I am looking for something for my medium sized living room. Preferably powered that has a sub-out, an optical in (for TV), and 3.5mm in (echo dot).

Right now I am considering Klipsch R-15PM. Is there anything else similar that I should consider? I will eventually add a sub to this.

Looks are part of the consideration for me but certainly second to sound quality. The looks of the Klipsch are very classy and appealing to me. These are going in a living room and not a theater so they will be used far more for music than movies, if that matters. Any help is appreciated.

Klipsch discontinued these (replaced with the R-51PM) and they’re now showing up at well under MSRP of $499.

Guttenberg (Audiophiliac) had generally positive reviews with one of the caveats being the market price at the time ($499). At $175, or even $275 for that matter, these are a great option for budget, secondary, or desktop amplified speakers.

These are good. Only a little more than your budget.

No preamp needed with these guys either. Plus you can add a subwoofer.

Amazon has them for 270/pair

Ditch the Sharp speakers and start over. You can find nice speakers in your price range regardless of being active or passive.

I’ve got a PC + TV above it setup (desk for PC use and couch behind it). I’m looking to deck it out with some great speakers for music (house / edm, hip hop), tv, video games.

Budget is $400. Ideally I’ll get dual input so I can plug in both my TV and PC with minimal cables, as well as bluetooth. Open to anything (receiver + passives, actives, building my own), but would just like to get the most bang for my buck :).

I’ve researched the following, but I’m open to any recommendations!

I have These speakers here. According to the reviews they have a built in preamp. Do I even need the NAD in this case?

Will get you evicted 😉

Looking to buy a pair of powered bookshelf speakers for apartment living room. Budget can stretch up to ~$350, but cheaper is ideal if it doesn’t require notable sacrifice of sound quality. Primary use will be music (source: laptop & phone. Genres will vary: plenty of rock, occasional classical, electronic, etc.). I’m open to adding a subwoofer down the line, but looking for a setup that can hold its own without a separate subwoofer.

Suggestions out of these options as well as other recommendations are welcome. Thanks in advance!

Will these work for you? Better than a sound bar.

Maybe just keep it simple. Everything you need is built in:
https://www.amazon.com/Klipsch-R-15PM-Powered-Monitor-Black/dp/B01A7J534G

And just use any DVD player for cds.

Klipsch R-15PM vs AudioEngine A5+ for computer speakers, both are $399.