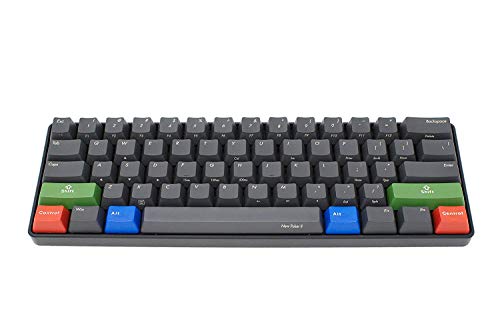 Just as an FYI, even though it’s $20 more you can get it off of Amazon as well. The massdrop version is a pretty good price if you’re patient though!

The Pok3r is superior to the original Poker II in pretty much every way (some people didn’t like the way layer programming worked on the Pok3r and preferred the Poker II for that, and others preferred the default arrow mapping of the Poker II). It’s also the most popular 60% keyboard, which helps explain why it is so often recommended.

The “New” iKBC Poker II, or Poker II Type-C as some call it (because it has a USB-C cable) is kind of a strange product. There’s not a lot of information readily available about it. It doesn’t seem like a Vortex product (like the original Poker II and Pok3r) but rather an independent iKBC product (who builds the Poker/II/3). It’s got some of the features that made the Pok3r great, like multiple layers of programming, but also retains some features from the Poker II (like the plastic case and arrow key location on WASD). It seems like iKBC wanted to re-release the Poker II as a “budget” 60% ($99) but with the features of the Pok3r, while adding new features like USB-C.

As far as that link you posted…I think that’s the ORIGINAL Poker keyboard (which pre-dates the Pok3r and Poker II). On the US version it says “New Poker II” on the front of the space bar. The surest way to tell is to look at the underside of it (it’s different than the Pok3r/Poker II) and see if it has USB-C. NewEgg, Amazon, and Massdrop all have it.

I’d love to tell you more but I don’t actually own one…I’m trying to decide on a new 60% myself and that’s why I’ve done some research to try and figure out just what the New Poker II is. As far as it versus the Anne Pro…I guess it depends. The Anne Pro is wireless which is nice, but I think the Pokers have better build quality and they have real Cherry MX switches. Anne Pro is also a bit cheaper. Down to preference on the wireless feature, I guess.