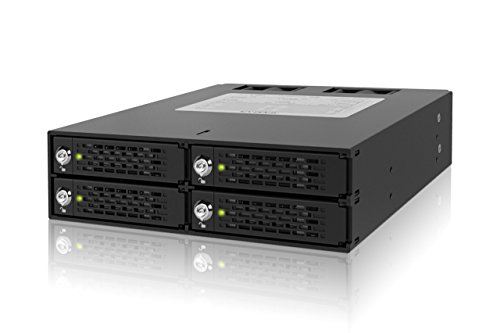 That’s not the exact one I got but it’s very similar — mine doesn’t have the locks. I think mine was 85-90USD? Expensive but nice…

I won’t lie, it’s got a nice “click” noise as you open or close the drives to swap them around.

ICY dock is kind of like this but without locks: https://www.amazon.com/ICY-DOCK-Rugged-Metal-Backplane/dp/B00IL5VCRQ

The ASrock motherboard has built-in dual 10GbE links but I keep them configured just like the SuperMicro — using one port for backup management access and then use the extra cards so they’re laid out the same.

Switch Spec’s:
Primary switch: Cisco SG300-28 — all gigabit with some fiber uplink ports that I’m going to move to, Layer 2/3 switch. It’s not a “full” cisco but it’s enough and it’s QUIET. I have a cisco 3750 that I keep in case I need to do work with a full cisco IOS.

Storage/Fun switch: Arista 7124-SX. 10GbE with a Fan mod so it’s now VERY quiet. It’s what I operate on mostly as all the servers and my workstation are on 10GbE.

Battery UPS’s and PDU’s:
2x Refurbished APC RME2200VA UPS’s each with a dedicated 20A circuit. I don’t trust myself with electronics so I had an electrician run two new circuits — I told him I knew I wouldn’t use all the power by a long shot but this way I didn’t accidentally pull too much power and burn the place down. It’s way overkill, but good to manage soon as I get the management cards online.

Each UPS has a dedicated PDU near the top of the rack which MOST things plug into those. PDU01->UPS01, etc.

I have my Storage and ESXI01 on UPS1 and ESXI02 on UPS2 so in theory I can take a big hit and keep going to some extent (hoping for at least networking and DNS while I get things back up). I’m going to work on connecting some Vintage Servers which will all (or mostly) go on the second UPS.

In the near future…
I will have a small Fiber Channel SAN infrastructure so I can hopefully create a VM to export drives over FC to some old vintage/unix boxes so I don’t have to run SCSI drives.