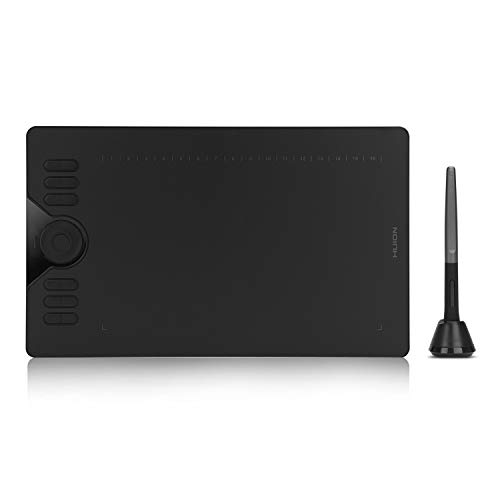 Right there with you on the non-display tablets! I kept trying to switch to screen displays to “see what I was missing” but I just plain don’t like those, haha. I always end up returning them and going back to my trusty little tablet.

I think it’s a mixture of a few things. I learned on a Wacom Graphire 3, it’s a pretty small non-display tablet from around 2002. I think I’ve gotten into the habit of drawing with smaller strokes, so I prefer a small portable drawing tablet, while still being able to look at my big screen monitor. The ratio of hand-movement to eye-movement is really nice with a non-display tablet.

Definitely agree with you on the wonky angles and the hand distractions! When you tried your pen display, did you get back pain? I definitely did! Looking online I realized it was a common complaint among digital artists, and that surprised me. It only ever happened with screen tablets, because you have to hunch over them to see them closely. Went back to my trusty non-display tablet and the problem was solved instantly. It’s so comfy, I can draw on it for hours!

Currently I’m using a Huion HS610. After the Graphire I used the Intuos 3 and the Intuos 5. I loved them all, used them for about 6 years each before they wore out, and then couldn’t find a good Wacom replacement (current Intuos Pros have issues with texture, or so I’ve heard). So I’m using Huion for now, it works well for me 🙂

The iPad Pro feels strange to draw on for sure. I have one but I rarely draw on it, certainly don’t like “finishing” pieces on it – it’s usually just for sketches when I’m on the couch.

You’re definitely not alone! Feels like there’s a lot of excitement out there over who has the fanciest tablet setup, but it’s totally valid to prefer a non-display tablet 🙂 I think we should consider ourselves lucky to have less expensive taste!

I currently use a Huion HS610. It’s basic, screenless, plugs into your computer, has 8k levels of pressure sensitivity and a battery-free pen. Those are the basic things I look for in a tablet 🙂 Honestly I think it’s good enough for any level of artist, I’ve been drawing for years and it still meets my needs. It’s about $70 on Amazon [here] if you’re curious. Good luck in the search!

Start wuth Huion HS610. Its very cheap to Ipads and also a good option to start digital art. It has a decent workspace for the price.
There are other cheaper options by Huion but you will have to sacrifice many workspace for it and will be difficult to work with.

Don’t worry about the fact that its a Pen Tablet and not something like an Ipad but it will take some time to get used to. Its like using a mouse for the first time.

Here’s the link if you want to check it out:
Huion hs610

I picked up one of these and I’m quite happy.

It’s my first one so maybe the more expensive tables are worth the premium, but I’m happy with it.