What is the opinion of Reddit about the
HomeBrewStuff Heavy Duty 10 Gallon Stainless Steel Kettle with Valve and Thermometer Includes SS Barb and Silicone Tubing? 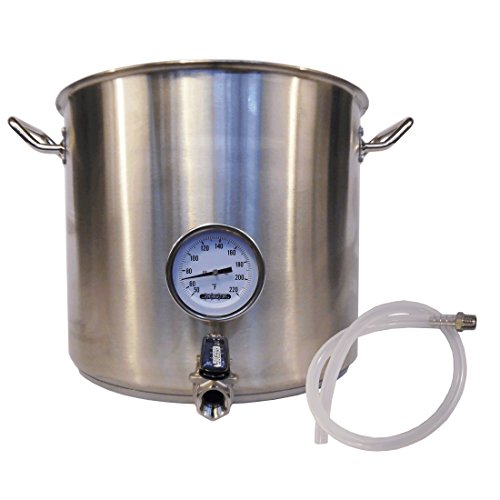 I’ve been brewing with this kettle for 3 or 4 years by Home Brew Stuff.

So let’s talk physics and thermo dynamics… So the question is, will a smaller diameter brewkettle help keep the boil going? Will moving down to an 8gal kettle (which is the same size as the burner) solve the problem?

I started with a 5gal brew pot. Seems to work ok, but I still have concerns about topping off the wort with fresh out of the tap water to bring it to 5gals… I really want to do full 5gal boils.

After doing a bunch of reading here and homebrewtalk, I decided to skip the 8gal brew kettle and go right for the 10gal.

We’re still brewing on the stove, it’s a glass electric burner. Even on high, we needed the lid on to get the wort boiling. Once we’d take the lid off to stir it would lose the boil. (I have no idea what effect this would have on the beer… ^[1])

So according to my calculations, it looks like there’s a whole 88″^2 that is not being heated, but is letting off heat when I have the lid off my 10gal BK.

My hypothesis is, by switching to a narrower BK, I’ll be able to boil the 5gal consistently because I’m adding heat in the same surface area I’m letting it go… (clumsily explained by a non scientist… I’m sure there’s better science words to describe what I’m trying to impart…)

Is it possible that my stove just isn’t powerful enough to boil 5gal?

If I get a propane burner, I can’t use that indoors, right? That seems like a bad idea to me… but brewing outdoors seems so… dirty? Error prone? we get a lot of “cotton” (from the cottonwoods) flying around here…

I’m working my way towards all grain brewing… if I have a 10Gal HLT can I use a 8 gal mash tun? the 8 gal I picked specifically for the false bottom…