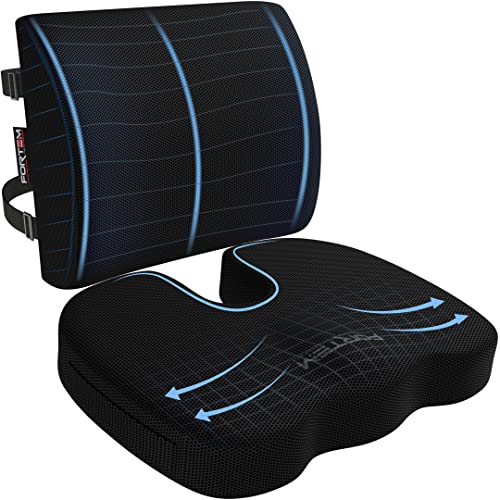 I use something like this. Cheaper and easier to travel with. Plus with the back cushion, you may not need rudder extensions.

Instead of a whole chair, would seat cushions and lumbar support make more sense.

Sure… bear in mind I am skinny 6′ 162lbs (not kidding about no butt). This does raise you up a bit.
I don’t know how to link pics but here’s amazon link Seat Cushion and Lumbar Support… https://www.amazon.com/dp/B01N6KTU29?ref=ppx_pop_mob_ap_share

Can you bring in a back or chair support that you can sit on? Like the ones they have for cars? Something like this

And nope, doesn’t struggle whatsoever. I was worried about that too and that’s why I opted to get a frame with dual motors. The lifting mechanism is smooth as butter.

As you can see I have my custom-built PC (which weighs about 30 lbs), two 22″ monitors, 21.5″ iMac and I usually keep 2 laptops and an iPad sitting on it as well. The frame is fantastic because it runs horizontally across the desk, so it should prevent sagging in the middle. But again, I’ve had this setup less than a month so things might change but so far it’s been fantastic.

That’s the exact same reason I decided to get mine. My back and my tail bone would start to hurt and this has really remedied that. I have the MARKUS office chair from IKEA and bought this seat cushion from Amazon at the same time as the electric frame. It’s helped my lower back and tail bone tremendously. And this fatigue mat is amaaaaaziinngggg for when I’m standing. I highly recommend getting a sit stand desk!