What is the opinion of Reddit about the
FiiO Q1 Portable USB DAC Amplifier? 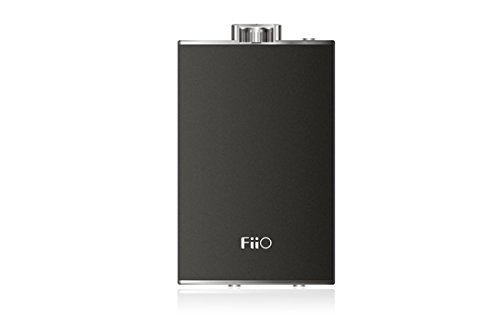 Hey wanted to get some input if you don’t mind.

Because of reasons, I have to buy off amazon and in the next few days.

to remove the loud white noise i have when listening to my phone/laptop with sensitive IEMs?

Can it also be used as a standalone dac to feed into an o2 amp?

You need at least something like a FiiO Q1 to properly drive the M220.

Not sure what kind of headphones you’re looking to drive and I don’t have one to sell but I have a Fiio Q1 and it works great and is pretty well priced ($69.99). It also has a built in battery which makes it nice and portable. runs off battery by default but if you want to just keep it plugged in via usb you can leave it in ‘charge mode’ (there is a switch near the usb port) it’ll work great and you won’t need to worry about battery.

Fiio also has other versions that are strictly AMPs without the DAC part (like the A3 or A1) that are a bit cheaper but it all really depends on what you are trying to do exactly and what form factor you need.

Is it that your phone can’t power it, or that you want to save battery?

Either way, perhaps the FiiO Q1 Portable USB DAC Amplifier would be better, then.

None that your ears are going to notice. Alternatively, get something like this.

What I have: FiiO Q1 Portable USB DAC Amplifier https://www.amazon.com/dp/B0157DKAU4/ref=cm_sw_r_cp_apa_gyB2zbTMC8XQF

Or get it here: https://www.amazon.com/dp/B00TIAYRDO/ref=cm_sw_r_cp_apa_FBB2zbWAVQK1W

Posted this a few minutes ago but got taken down. So I’m posting it again.

I recently posted asking if anyone had a solution to some bad static I had on my computer. You can read it over here.

To summarize, recently purchased a tube amp, plugged it into my desktop computer and i had horrible static.

I didn’t have a DAC so I purchased on, the Fiio Q1. Tried it out, still get static. Tried it out on my laptop and phone and it works with them. So I’m stuck in the same place as before.

Here’s some other things I tried:
-Removed the GPU (sound card is very close to it)

-Plugged jack into rear port instead of front

-Moved amp away from any electrical device

Here’s my theory. My motherboard must have some problem. I stated this in the other post, but when I touch the audio jack that is connected to the amp to any metal part of the computer, I get static. This includes the USB ports, the microphone jack, the IO shield, and the screws holding the motherboard in place. All of them produced the same static.

Along with this, the static is not constant. It changes depending on what I’m doing. Meaning if I move the mouse, it causes more static. If I open up another window, it causes more noise. Here’s a recording. The high pictched sounds is when I move my mouse. The buzzing is when I open a windows.

I also wonder is the PSU is a problem. It’s a EVGA Supernova 750W, but it’s underneath the motherboard. I doubt that’s the problem, but it’s a thought.

>The PSU is the problem but not in the way you think. Your older DAC was purely USB powered and the new one is USB and grid right ? Feedback from your PSU to the grid is pushing noise in to the amp, isolate its power supply.

This DAC is still powered only through USB. No external power. Plug it into my computer and wire it into the amp, that’s it.

I’m honestly unsure what to try at this point.I’m think that purchasing a new motherboard may be worth a shot, but I’m unsure.

You need a usb host / otg cable and usb dac/amplifier.

What I was using with my Note 5.

Thinking about getting a portable headphone DAC/amp

Current setup: IPod Classic Gen 7, Audio Technica MSR7s. For what it’s worth, I have lots of flac music too.

Thinking of adding: A DAC/amp to go with my iPod. Something like this Fiio amp along with this line out for my iPod to skip the iPod’s DAC.

The Big Question: Do I really need this? If you have experience with similar equipment, would you recommend this type of an upgrade, or is it only a sidegrade? My headphones don’t need anymore power, so, in your opinion, would it be worth getting an external DAC/amp?

The E10K isn’t very mobile. It’s small, but it’s not really the right shape for a mobile amp.

There is a thread here https://www.reddit.com/r/Nexus6P/comments/40pri2/fiio_q1_dacamp_works_with_nexus_6p/

If you want one, Fiio Q1

But my recommendation is that you spend the $65 at Chipotle or something.

Hey there all. I’m a professional classical musician operating out of Boston. I play with orchestras nearly every day of the week – I am an audiophile in real life, but I’m only just now delving into what it means to be one with music here in the digital realm.

During the fiasco that was the Galaxy Note 7 recall, Verizon gave me the option to switch to any other phone that I wanted while the Google Pixel was rolled out, the phone I’d eventually purchase. I chose the HTC 10 because I knew that it had a hi-fi DAC and Amp built into it, and I was curious about trying it.

I was catapulted into a whole new world listening to music on that phone with my bose in-ear and overear headphones (no clue what the impedance or actual models are, just know they aren’t the noise cancelling).
I got my Pixel a week or two after, and left the new found realm I had entered into. I’ve been left wanting more. Thusly, I’ve taken to the internet to try and solve my problem.

The biggest issue with my decision to purchase a DAC / AMP combo is that I’m not certain what impedance I have on these sound systems I have; all I do know is that they are Bose. Yay.

My ears are well trained, and even a 20% increase in quality matters to me. My eye is presently on…
https://www.amazon.com/Q1-Portable-Headphone-Amplifier-Black/dp/B0157DKAU4

Can anyone guide in the correct direction here? My budget presently is under $100, just so I can get acquainted with the realm of audiophilia. Thanks in advance.