What is the opinion of Reddit about the
FiiO E10K Portable Desktop Headphone AMP/DAC with Astell&Kern (iRiver) ICP-AT1000 Dynamic Driver in-Ear Monitor Headphones from Astell&Kern by Final Audio Design? 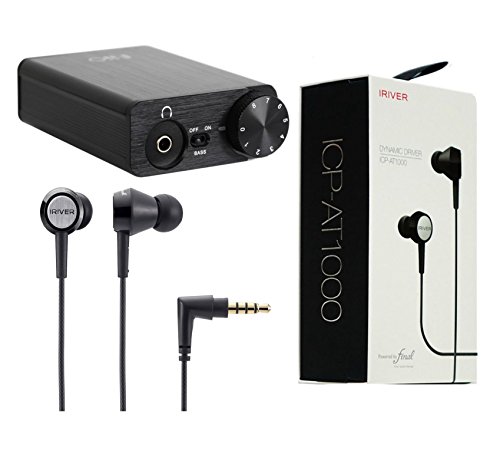 Wireless headphones could work, however they use the same DAC as the wired. It seems like your sound card is broken, thus I would recommend a USB DAC &amp; AMP

The benefit of this is that you can use it for multiple devices that support USB. So other PCs, laptops or even smartphones.

It also does sound a lot better compared to most on-board sound solutions.

Thanks for you answering, I like the DT 770 the most. Also one more question, if I really want to save money and I buy a combo of this https://www.amazon.com/gp/product/B076DVBNRP/ref=ox_sc_sfl_title_3?ie=UTF8&amp;psc=1&amp;smid=A364KLI3BZY8MZ. will that fit my desire and does this headphone comfortable?

Like the other redditor said, if the headphones you get are over 32ohms or so (the ones you were looking at, the AKGs, are in the 60s) than that means they’ll require more power than the controller itself can provide to power the headphones. That was one of the reasons that led me to decide to get the Phillips Fidelio X2’s (I actually got the HRs, but there’s a minimal difference). I can plug them into my phone, iPad, iPod, XBOX One X controller, and PS4 controller and they’ll play without requiring an amp/DAC. The Phillips Fidelio X2’s are open back headphones (which means it will have a more natural soundstage and give the sensation that sound is coming from further away from your head than directly on top of your ears — the alternative are closed back headphones (likely the type you’ve had on almost every other pair before them) which can have a more punchy sound. I bought them wanting my first open-eared pair.

The Massdrop AKG7xx’s are open backed as well. With a good DAC, open back headphones will separate the left and right channels even more and give you that feeling of things all around your head with some closer and some further sounds. I definitely recommend checking out /r/headphones and read that sidebar, particularly this purchase guide which I’ll link here. It breaks down headphones into closed and open and by price categories, and amps/DACs into the portable and desktop and again by price. I did a ton of research and was looking for a unicorn of sorts — a pair of headphones that I could be really satisfied with while listening to a variety of sources, about an even split of gaming, movies, event TV, and music. And I’m not disappointed whatsoever. They’re wired, but come with an extremely solid 3m (9 foot) cord that will stretch across your living room. And rather than have a cord running out from the X2s that could break, fray, or falter, it has an audio IN jack so you can plug in the cable of your choice (as far as length and purpose — which is why that V-MODA Boom mic works perfectly as a replacement for the regular cable between the controller and headphones for whenever I need a microphone).

According to that link, the Fidelio X2’s have emphasized bass and treble and recessed mids (every headphone will have it’s speciality and strengths and weaknesses). The Massdrop AKG7XX are built similarly with emphasized bass and treble and neutral midrange. Of course, all of that is easily changed if you add a programmable amp/DAC or even a mixing board or receiver that allows you to play with the equalization and dial the highs, lows, and mids to your exact preference.

One of the most popular and inexpensive amp/DAC combos is the FiiO portable E10K which is $77 on Amazon right now (this link gives away a free pair of earbuds for the same price as buying the E10k without them). Or if you wanted to grab a real monster, JDS Labs’ “The Element” is $350 and is supposed to really thump. If you go down the road of amps and DACs, what you need to know are how you plan to use them — if you want to set it in the room you’re going to use it in, grab a desktop, if you want to take it on the go and have it be battery powered or maybe as a USB input on your laptop PC, go portable. You can buy a headphone amp, you can buy a DAC (digital audio controller — that’s what creates the better soundstage and separation of channels), or you can buy a combination of both amp & DAC.

Another extremely popular alternative to the FiiO is the Schiit (that’s the brand name) products. For example the Fulla Schiit 2 works as an amp, DAC, and pre-amp and can be powered by low voltage USB ports and phone chargers via micro-USB. Depending on your needs, you can buy just a headphone amp, just a DAC, or a hybrid of the two like the FiiO E10k or the Fulla Schiit 2 Stack (or one of each like Schiit’s Modi and Magni).

When considering an amp/DAC, the primary things to look at are power, function, and features. It’s entirely dependent on what you want to do with it. Whether you’d want to buy a soundcard for a PC, or a USB powered device, or something you can run on batteries, or plug into a wall. And more importantly, that it has what you want on it. (For example, if you want to run an optical cable into it, or have a secondary headphone jack out, whether you want XLR inputs for microphones if you stream and want to power all of that at once, whether it has a bass boost if you like that, etc.)

I can tell you that the Phillips Fidelio X2’s are the most comfortable headphones that I’ve ever worn, and it looks like they’ve dropped below $300 since I last linked them to you (about $30 cheaper right now). They’re over ear (rather than on-ear) phones with plush memory foam padding and a ski-goggle like strap that allows them to sit comfortably on your head without ever feeling tight or adding pressure, and have a ton of room for people that wear glasses, hats, have larger heads, etc. Also, 50mm drivers and a really large speaker size on either side. I don’t regret my purchase at all and am glad I decided to go with them. Gaming headphones you’re paying for the brand name and the microphone usually comes at the cost of better audio, so when you can just spend $30 for the V-MODA and add a mic when you want it, that’s generally better.

For what it’s worth, I also bought the Astro MixAmp Pro TR for $130 that would normally be bundled with the A40s. It has an optical in or connects via USB and is auto-detected by the PS4, and has a giant volume knob for overall volume and then a dial to shift towards more game volume or more party chat volume, as well as a Dolby Digital option. While I haven’t played with it too much, I honestly find that as much of an improvement as it is over not having a headphone amp/DAC at all, having it at max volume is still disappointing when compared to running it from the audio out of my home theater receiver (which is why I suggested that). If you’re already playing in your living room where your home theater system is, you likely have a home theater receiver and if it has a headphone out jack, I highly recommend running a cable from it to your headphones and see what a difference that makes before buying a specific amp/DAC combo for them. The other drawback to the MixAmp Pro is you have to choose between PS4 and XBOX One. A simple amp/DAC just creates an analogue stereo signal and will work with anything.

If you plan to use your headphones in more locations, the Fidelio X2s will still be easily powered by anything you’ve got, and you can buy a portable amp/DAC for on the go. But for me, I’m so impressed by my garbage 10-15 year old home theater receiver that I’d probably buy a new one rather than buy a dedicated headphone amp/DAC and continue using the headphone out. Again, there’s all sorts of wiring tricks you can do, like running a V-MODA cable from headphones to controller when you want to use the MIC and when you don’t, run it to the audio receiver. Or even use that Y splitter I mentioned and plug that into the audio input of the headphones, and then run the mic end of the splitter to the controller, set the audio output to receiver out, and then run a cable from the receiver to the other headphone marked end of the Y splitter’s.

That way you can dial up the receiver as high as you like, or use devices like a Woojer Strap (which is on sale for $129, normally $150) that’s a haptic feedback device with two bass transducers on a seatbelt or messenger bag like device. I use it for big movies, loud games, event TV, and music when I want to physically feel the sound (it’s like a silent subwoofer strapped to your chest). Or a SubPac (more like a backpack). I’m personally waiting for Q4 this year when Woojer releases their new Ryg (it will have six individual bass transducers — two on the front, two top back, two lower back — and you’ll be able to feel an explosion coming from the left differently than a direct hit, etc. There’s an email signup list if you want to be notified when it comes out and get a discount (not sure how much), but just in case you’re interested in stuff like that (especially great for VR), I figure I’d mention it while I’m overloading you with info.

Tl;dr —- Check out /r/headphoneadvice when you get close to making a decision, and mention the setup you’re thinking of getting and what you intend to use it for (FPS gaming primarily, or if you intend to use them for other purposes too). Those guys are often audio designers and will pick out details that you overlooked or make better suggestions for ways to draw more power or ensure that you’re supplying enough power. If you go the Fidelio X2 route, I bought mine from Amazon Prime and think I had a 30 day return policy. If you have a home theater receiver already in your living room with a headphone out jack, definitely try that and it will power any headphones you end up with easily. And if they don’t have a jack, you can buy an RCA to headphone jack cord and run it out from your TV’s output or your receiver, etc. But again, the X2s don’t require any of that and can be used directly from your dualshock or XBOX One controller.

Hopefully this helps, I know it’s a lot to read but I did a lot of research so I’m saving you some time, haha.

You definitely want a dac/amp if the static is bad, but I think for your purposes a lower cost combo unit will be more than fine. The Fiio e10k is ~$80 and amazon is even bundling it with a budget IEM (https://smile.amazon.com/gp/product/B076DVBNRP/) so that’s a useful starting point for deciding how much to spend. The MDR-EX800ST plus that is actually below the budget you stated.