What is the opinion of Reddit about the
Essentials of Strength Training and Conditioning? 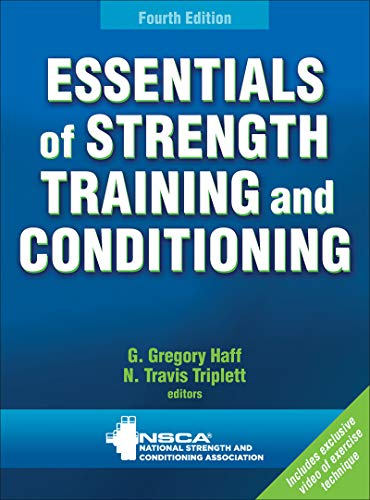 May I suggest you look through the texts published by the NSCA? They’re more in-depth than most trainers need, but they do cite their sources, and I believe that all of the sections are written by people that are either sports med doctors or kinesiologists. (Available here: https://www.amazon.com/Essentials-Strength-Training-Conditioning-Gregory/dp/149250162X; the NSCA is one of two certification organizations in the US that is most heavily based in science.)

One point I remember is some of the physics. Take a simple dumbbell curl; your elbow is the fulcrum, and the weight you’re moving is at the end of the level. The farther away horizontally the weight is from the fulcrum, the more work is required to accelerate of deaccelerate the weight; the movement is requires the least amount of work to complete when the weight is closest to vertical in relation to the fulcrum (the elbow). If, as your forearm nears horizontal, you bend your torso backwards, rather than using your biceps, then you’re reducing the amount of work done by your biceps, and using your core to complete the motion. If your goal of doing curls is adding strength and mass to your biceps, then that isn’t going to do it. In order to add strength and muscle mass–adaptation–your muscle needs to be doing some kind of work. Having less-than-ideal form means that the muscle isn’t doing as much work to complete the exercise, which, in turn, means that you aren’t going to build muscle as quickly in the area that you’re trying to target. You also run into questions of how intense the work needs to be to trigger adaptation; from a pure physics standpoint, the amount of work done to move a dumbbell from ‘A’ to ‘B’ will be identical, regardless of whether it’s momentum that’s moving it, or if it’s a slow, controlled movement. But moving light weights (relatively speaking) with strong muscles isn’t going to result in adaptation.

Form and technique are, to a degree, based on the individual. The length ratio of your fibia/tibia to you femur, and the exact structure of your pelvis, are going to determine how deeply you can squat, and how far apart your knees are going to be. On the other hand, there are certain techniques that are simply more likely to cause injury. Take kettlebell swings; the RKC technique brings the kettlebell to shoulder height, but a technique used by some people (seems to be a Crossfit thing?) is the swing the kettlebell all the way overhead. You use momentum to bring the kettlebell up, but once it’s over your head you’re trying to use your rotator cuff muscles to deaccelerate the mass. The muscles used to accelerate the mass are large, your rotator cuff muscles aren’t; there’s a strong probability of eventually straining or tearing your shoulder using that technique. (I suspect that the people teaching that technique misunderstand how to do a kettlebell snatch safely.)

Again – I’d suggest reading the texts, and picking up a few kinesiology texts as well.

This book is quite necessary if you aim to learn more about the ins and outs of periodization nutrition, etc. Another book I’d highly recommend is this book by the legend, Zatsiorsky, which is focused mainly on periodization and important principles on strength training.

Getting both of these either new or in good condition via amazon is cheaper than what you’d pay for this RTS classroom thing, which is either 100 or 135 bucks per month, which is not worth it when there’s cheaper literature by the folks who run the game.