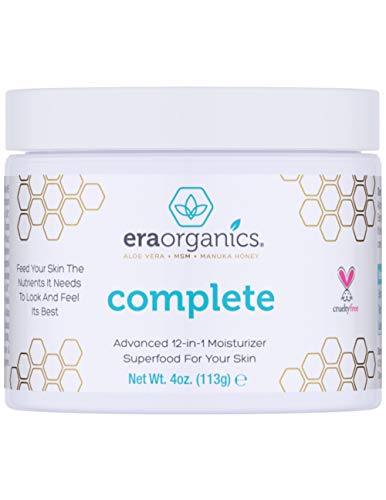 Stop using it. If you feel bad about spending money on something that didn’t work you can still use it as a hand cream or body cream.

That’s a long list of stuff so it’s hard to tell what you’re reacting to. This is one of the reason I steer away from natural products because they put umpteen different herbs and stuff in it and I’m usually sensitive to one of them. Having said that I’ve been using Honeyskin which is full of stuff, but it works well for me. I see it’s on the Amazon Germany site but damn, that price is like 4 times what I pay for it in the US. Here’s something that’s very similar by Era Organics and more affordable https://www.amazon.de/Gesichtsfeuchtigkeitscreme-Verbesserte-Manuka-Honig-Kokosnuss%C3%B6l-strapazierte/dp/B00LZWV0WY/ref=sr_1_2?ie=UTF8&amp;qid=1492688716&amp;sr=8-2&amp;keywords=era+organics

If you use something make sure the manufacturer says it is good for rosacea. If you go to a site like Amazon and looks for rosacea cream you will no doubt find stuff.

What might help is find a cream with MSM in it, or even MSM pills. The biggest downside to MSM cream is it smells bad. Both the Honeyskin and the Era Organics stuff have MSM. (At least the US stuff does, I can’t read German, I am going by what is listed for them on the Amazon US site.)

And don’t forget sunblock. A mineral sunblock is best, like zinc oxide or titanium dioxide. I also like mineral makeup to hide redness and it also is a natural sunblock.

This subreddit praised the use of aloe. I use this moisturizer on my problem areas multiple times a day. It’s amazing. Also, some mattifying, so don’t worry about a shiny face!
https://www.amazon.com/Era-Organics-Moisturizer-Damaged-Sensitive/dp/B00LZWV0WY/ref=sr_1_1?ie=UTF8&amp;qid=1476058473&amp;sr=8-1-spons&amp;keywords=era%2Borganics&amp;th=1