What is the opinion of Reddit about the
Edifier USA S330D 2.1 Speaker System (Black)? 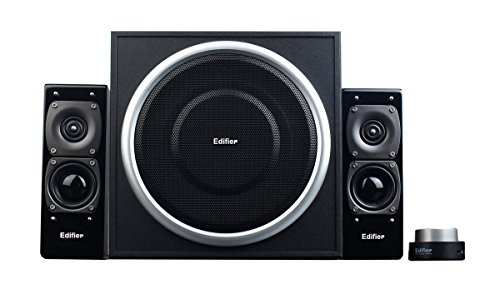 I need to replace my PC speakers. It’s an old Creative 5.1 setup, but they’ve started “popping” quite badly and they were never great to begin with.

I’m looking for a reasonable desk-sized 2.1 system, budget of $200. In general I prefer flat response over bass-heavy, but I do want it to be capable of good bass response – I was led to believe a 2.0 monitor setup would leave me disappointed after having a dedicated sub all these years. Don’t need Bluetooth or anything too fancy. Was looking at the Edifier S330D but I’m not sure if these are considered decent for the money.

Right on. It usually only effects output by a few decibels, quality wise I haven’t had issue. Yeah absolutely agree with the overkill factor but I don’t think it will drown out the record player. I usually have music playing at 5% or lower volume, starts opening up around 15-20% and plays clean at 100%.

But anyways regarding buying a computer set, I all ways went with Altec and then the last set had a custom adapter for the sub to work which was crap quality and broke (I moved the speakers around a lot). Because I do like computer subs, it’s dirty without any modifications . But from a price point perspective to buy a sub within the range I’m accustom to it’s just cheaper to buy a dedicated box. I should be able to pop the front panel and modify the plate to get that rattle going. So not too worried.

Compare Edifier S330D at 154$ vs the mono at 131$ or even the dayton at 160$. It’s a massive step up from what that provided sub would bring. And I wouldn’t ever use the speakers, I was planning on splitting the Edifier into the split anyways lol.

Thanks for the response! That’s the model up it appears from the last pair I had. Which is discontinued by the manufacturer in Canada. They were the first speakers that had the unique port on them which both these models share. Would never buy this again.

Albeit being difficult to keep clean the inputs on this model are perfect. But I think if I use my brain for a minute what I am looking for is an emulated bass signature or actual emulated bass vs a true bass sound signature.

But maybe I will just stick with what I know. These are the speakers I had originally till I lost all my possessions. Don’t remember ever having a problem and the bass is huge. And you can add a cone onto it. https://www.amazon.ca/Altec-Lansing-Mx6021-Expressionist-Speaker/dp/B0025VKUR0/ref=sr_1_8?ie=UTF8&amp;qid=1468700730&amp;sr=8-8&amp;keywords=altec+lansing