What is the opinion of Reddit about the
DayDream LED Cover for 108 Mechanical Keyboard White Backlit? 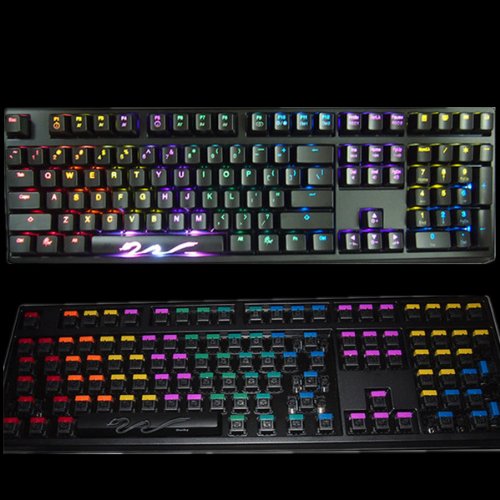 Hmmm, how fancy of lighting are we talking here?

Some keyboards simply light up, others have fancy RGB LEDs with ripple patterns coming from each key press. Others fall somewhere into this spectrum.

The fancier you go, the more expensive it gets, generally.

Also, unless you want to change the colors on the fly, you may be better off getting a board with bright white LEDs, and adding something like these

Finally, do you have a set form factor( See this image to see what I am talking about ): 60%ish boards are all the rage these days, and I personally use a 65%. However, I have yet to see an RGB board smaller than a Tenkeyless (TKL).

If you have an MX keyboard, you could try these LED covers which you can get on Amazon or Banggood, and it looks like something very similar also dropped on Massdrop here in the past

> I’m fine with paying premium to simply be able to say that I have cherry switches, even if the performance is similar.

No seriously, Gaterons are considered smoother by most people, but I use Cherry myself (at least til the release of the Pok3r RGB <3 ).
>For what you said about being able to change the colour of white LED’s, that seems like too much work and to me, simply not worth it over just sticking with the colour.

What I was talking about was Daydream LED covers which you literally just put on your LEDs so they filter everything except for one color out. Very simple, cheap and if you only want one color configuration its a nice option.
>For the keys, I definitely am favouring clickity clackidy, but unfortunately where I live, we don’t have any local PC stores to test the difference between blues and greens. With that being said I think the most sensible option is to just purchase the blues, as it is the more popular and widely preferred colour.

Alrighty, so Backlit (pref RGB) Cherry MX Blue Fullsize.
For RGB Id recommend the Ducky Shine 5 which is $165 shipped but offers high quality and looks sweet as fuck.
If that premium price is too much you can go with white LEDs and get the CODE keyboard at $145.
I dont know what you do on the PC, but Ill assume gaming. Remember that Blues sound awesome and feel great when typing, but arent the optimal choice for some games when you need to press the same key multiple times in a short time which is one of the reasons why I sold my Cherry G80-3000.
The two keyboards I linked are both of very high quality, so you will love them. Also both are available with other Cherry Switches, so in case you wanna switch I dont need to link you again. No gaterons tho!
If you want after market keycaps: Massdrop makes some nice group buys.