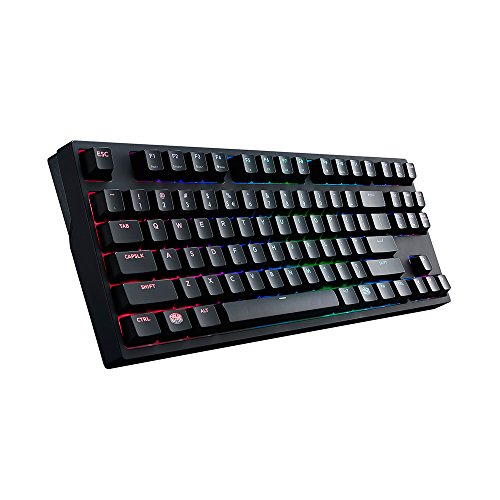 It does have red switches! In fact, the red switch board is much cheaper.

Remember the Ducky board comes in different colors too. The beauty of mechanical keyboards is there is nearly something available for everyone. And obnoxious clacking.

The iKBC is very well received here. I don’t know anything about the software, but it’s definitely a solid choice. This one is more basic but also a solid choice.

The volume rocker is a gimmick because it’s an extra feature most of us don’t really care for. We can set media controls to say, F2-F7. For ones with smaller keyboards, it’ll be layered. For bigger ones with dedicated keys, they can be your default function for those keys. A lot of us just prioritize things differently. That’s why I had to ask you and others what you care about most.

I ended up with a MasterKeys Pro S for this reason.

It has downright unusable on board macros, and the same rubbish keycaps as any other gaming board, but otherwise it’s been great. Can swap those out easily if you don’t like them.

Rantopad MXX is great too, plus it uses Gateron switches (which many people find superior to cherry).

MasterKeys Pro S is on Amazon, red switches are an option. Looks like it’s out of stock right now though.

I have a Cooler Master Masterkeys Pro S Tenkeyless with Cherry MX reds (https://www.amazon.com/dp/B01D8ETGN6/ref=cm_sw_r_cp_api_7mPWAbB6HJ5V1) that I would consider trading for this. If you’re interested.

Coolermaster masterkeys is an amazing keyboard and usually on sale on amazon . It’s over budget (112 w/ sale) but 100% worth it imo.

The biggest question you want to answer for any mechanical keyboard is which type of switch you want.

Most exclusive gamers like linear switches, which let you double tap very effectively. These are usually sold as ‘red’ switches.

There’s also clicky switches, which have a sharp bump and audible click when the key actuates. Sold as ‘blue’ switches.

Then there’s tactile switches, which have a lighter bump when the key actuates (they’re as quiet as reds). They’re sold as browns, and are somewhat of an intermediate between red and blue.

Generally speaking, blues are for exclusively typing, reds for exclusively gaming, and browns are good for a mixture. I’d recommend going to a Fry’s/Microcenter/Best Buy (in that order) and finding which of the three you prefer on a in store model. Brands vary between their implementation of clickly/tactile/linear, but not too much.

Then, figure out whether you need programmable macros and such. I usually play games that really don’t require them, so it’s a non issue for me.

If so, that tends to be the one feature that gaming marketed keyboards have over the others at this price point. Coolermaster is generally the only gaming themed company I respect much. Their stuff is well priced, and makes some cool innovations. And their keys have a standard layout.

If no, then you have a ton of good options and budget plays a big role. You could get the wireless Anne pro. The rgb Ducky Shine. Or the excellently budgeted Magicforce 68. You could get a WASD keyboard and completely customize individual keycap color.

Any of those would be good options, as well as more but it’s probably already overwhelming.

and how do those 2 compare to for example, this in terms of sotware, rgb leds, and overall quality of the keyboard?

Thanks all. Based on your feedback, here’s what I plan on purchasing:

Ducky There are ducky RGB models

Last one, Ikbc There are rgb models (I think)

When it comes to the gaming branded stuff, you can’t get much more compact than Coolermaster’s Master Keys Pro S. For the /r/MechanicalKeyboards stuff, there’s Vortex keyboards that are even more compact.

As for your RAM, I suggest the GSkill Ripjaws, which is on the motherboard QVL and matches you color scheme: RAM QVL

As for your keyboard, I suggest the Cooler Master Masterkeys Pro S. It is available in the size you want (called TKL) and has RGB. It has a standard bottom row, which makes swapping keycaps easy, and high quality keycaps out of the box. It can be found Here Alternatively, this iKBC would offer the same specs and make Dvorak/Colemak/Workman easier.

Edit: Changed Z to Y after my keeb switched to ISO-AL