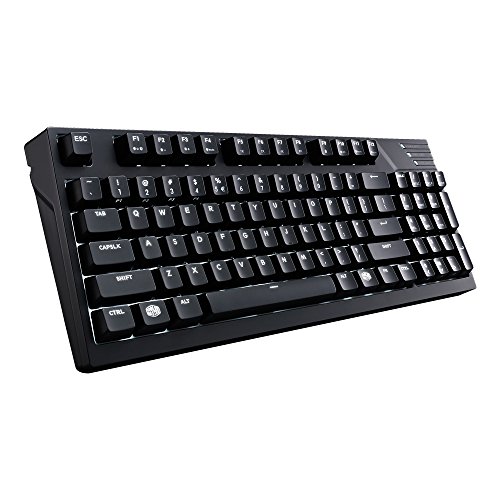 Brown switches are a good half step between reds and blues. I have tried both blues and reds in the past. Blues were too stiff and loud; reds were too mushy, but Browns have been the Goldilocks switches for my fingers.

As far as getting away from a tenkeyless keyboard, I was on a search for the right keyboard for me and landed on the Coolermaster Masterkeys M. I sometimes work from home, and wanted tenkey functionality, but didn’t want a long-assed board for my day-to-day. https://www.amazon.com/Cooler-Master-MasterKeys-Mechanical-Keyboard/dp/B01ITE93K6

This is the Keyboard I use. It’s CherryMX Brown (So quiet for a Mechanical) and it has a smaller than normal profile, but still has all the functions of a normal keyboard

My first was a blue switch Razer Blackwidow.

My second was a red switch Cooler Master Quickfire.

I guess I’m just wondering if there are any other options or things I should consider. I’m big into gaming, so I figure red switches would be the best.

Are there any other keyboards with MX Browns (or equivalent) that have this particular form factor: https://www.amazon.com/dp/B01ITE93K6/

I’m really loving the combination of ten key with a smaller form factor and still retaining the arrow keys, just want to know if I have more options.

I’ve got a compact cooler master with cherry brown switches and love it. I paid more for this because instead of the dumb “tenkeyless” design, it has a full numpad which is crucial for Excel as well as real gaming where an inverted T arrow-key set isn’t really helpful.

I have no brand preference – I just wanted that one feature. I’ve only had it for 6 months so I don’t know how long they last. But the build quality is excellent.

Any recommendations would be lovely! thank you.

Wow, I really like the look of the MasterKeys one. I was leaning towards brown switches, I think I’ll have to order the Pro L brown on amazon…thanks for the list!

Seems like a fair price for it unless anyone knows of a better online dealer to search on.

Basic history first: I have a Logitech G710+, I like brown switches, and I dislike the non-standard layout of the G710+ which prevents me from easily buying new keycap sets, especially because I don’t live in the US.

Basically I fell in love with the 90% keyboard layout. It’s this layout if anyone is wondering.

So I’d very much like to have a keyboard like that. The Coolermaster Masterkeys Pro M looks like the best keyboard to fit the bill. However, I can’t buy it locally in my country because it doesn’t come with the ANSI layout, which is the one I want. So I’d have to get it from outside. And I’m having lots of trouble finding it. I found this Amazon listing for one, but it looks like it’s a “like new” keyboard, so that worries me. On the other hand, that’s the only actual listing I managed to find of that keyboard. I can’t find it anywhere else.

So my question is: are there any other keyboards with the same layout as the Masterkeys Pro M? And if not, is buying the keyboard from that Amazon listing a safe thing to do?

MK Typist is a pretty decent full size with Browns or Silent Reds.

Ducky One 2 is also nice.

Cooelrmaster Masterkeys Pro M would be more ergonomic, but still has a number pad.

A little more expensive and bit over your stated budget, but a Leopold FC980m. Leopold are the best quality options available.

Single colour backlight, neutral colours and well-built, good looking stock keycaps, ~the same price as a STRAFE and the layout is generally superior as well, less space but you get all keys.

Again, ~same price as the STRAFE RGB but overall better quality, standard bottom row etc, this can also be counted as the Masterkeys M RGB as they’re virtually the same price / form factor, just, not literally.

An overall similar build to the K70, neutral colour and design as a whole (keycaps aren’t the prettiest thing in the world but they’re not as bad as the STRAFE’s keycaps IMO), and it’s commonly on Amazon for ~$60USD, whereas a STRAFE isn’t usually much below $100USD.

Oh and, no, before you say Kailh is worse, Kailh is quite literally better than Cherry MX in numerous regards, if you’d like I can quote someone that explained it better than I ever could and has worked with Kailh first-hand. Cherry quite frankly isn’t what they used to be.

There’s also a million and one generic Kailh/Outemu boards that are TKL/fullsize for sub-$60 on Amazon/other marketplaces that I won’t mention because well, there’s way too many to count, many of them use the same OEM just with different names and a lot of them are actually excellent budget boards.

Basically the older brother of the Masterkeys line, uses a very similar design, only real ‘downside’ is that it’s TKL and it has no LEDs, which at the end of the day is preference, some want fullsize, some want even 60%. Some want RGB LEDs on 24/7 at the highest setting to ensure blindness ^^^^/s and some want no LEDs.

There’s also the CM Quickfire XT which is basically the same thing but fullsize, though they’re usually not as cheap for some reason.

Ducky is of course a fairly well-known company that make keyboards that (usually) aren’t overly flashy, don’t use software (except for the newest RGB one IIRC) at a reasonable cost, you can get a Ducky Shine 5/6 which is fullsize, comes with excellent lighting, a standard bottom row and PBT keycaps (which quite frankly shit all over Corsair’s stock keycaps and any other ABS ones for that matter), all for around the same price as a STRAFE RGB. The One is basically an alternative to the STRAFE, seems like it only comes with ABS keycaps (or PBT are more rare), but it’s also an excellent option if you’re not huge on RGB lighting (they also come with removable cables, which is a nice as hell feature for the sake of cleaning).

There’s also the Ducky One TKL which is well, basically a Shine 5 without the numpad at a lower price. There’s also the fact that Ducky boards come with more than just MX blue/red/brown (do Corsair boards even come with MX blues anymore? last I heard they didn’t).

Not the one on Amazon?