What is the opinion of Reddit about the
CENTRANCE MicPort Pro – CE1801? 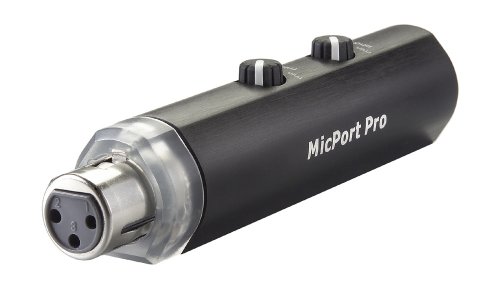 I want to create some simple screen recorded videos and either record audio in real time as I demonstrate what I am showing or after the screen recordings are made. I plan to use a Micport Pro and a Countryman headset. I have never done anything like this before and some of the recordings will be made while I am recording videos in a classroom environment with possible background noise. I will be recording directly into the ScreenFlow screen recording program.

> The good news is the expensive part of a recording card is quality preamps, and you have the ART taking care of that. The ART outputs a line level signal on unbalanced 1/4″ jack, so if you use a jack to jack cable into the sound card this should work great. On the computer, choose “line input” instead of “mic” and this should deliver clear, hum free sound.

We’re on the same page here. This is exactly what I tried in my example. I used an XLR to 1/4 TRS connection, and got the example listed (stereo input that mimicked the balanced mono signal). Instead of converting Balanced to Unbalanced, it just treated Balanced as Unbalanced.

Although I didn’t test it, the XLR to TS (mono) would just cut out the balanced audio, rather than preforming the recombination. I’d keep the noise added into the signal. Functional, but losing all the benefits of running XLR. Might as well switch back to a USB mic at that point and work on my cable management skills to reduce interference.

>The sound card spec sheet is focused completely on all the lovely output specs and omits to even mention there are any inputs.

You noticed that too, huh? That’s by far the weirdest thing I’ve seen. Who puts out a product that only has maybe ten functions, and then doesn’t provide information on half of them?

>it could be the D-A converters are trash despite the high-quality A-D.

This was my initial thought. But…

…It sounds like there’s more than one thing going wrong here. I can’t really narrow it down to a bad ADC if my inputs are still miss-matched.

>So, if you don’t get good results setting up as I’ve suggested above, it’s possible you will need to invest in an audio Interface designed for recording.

I went with the CEntrance MicPort Pro and took the ART preamp out of the line, since it was the only one I could really find that offered 24-bit/96kHz conversion.

Unfortunately, this does have a USB interface with about 2 ft of cord running past other cables. Noticeably better than 15 ft of USB like I was before, but it does pick up a tiny bit of interference from the surrounding cables. I’m a bit frustrated I couldn’t run a balanced signal all the way into my machine.

If you have any professional audio cards that would handle input that you can recommend, I’d be curious to look at a few. I couldn’t find anything with Google. “Capture s” just bring up RCA/HDMI input, and “Recording s” got me nowhere.

Just a side note, this thread was very informative to me. Two weeks ago I figured XLR was plug-and-play (with an appropriate adapter), just like the USB version of the same mic. I had no idea that TS/TRS/TRRS were all different things, or that microphones (like headphones) needed a preamp. Now you guys are telling me there are actual functional/technical (not just qualitative) differences between consumer versus prosumer hardware.

I knew audio was going to be a rabbit hole. I didn’t realize just how deep it went. There are so many things I had no idea that I didn’t know.