What is the opinion of Reddit about the
Cambridge Audio SX-50 Bookshelf Speaker | 100 Watt Home Theater Compact Speakers (Black)? 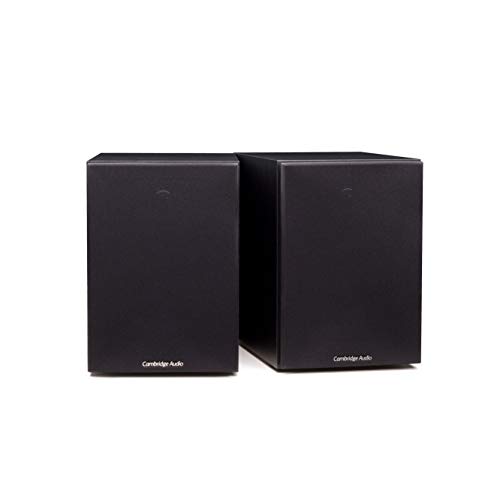 Yeah, I wasn’t sure about the speakers, I also had my eye on a pair of Cambridge SX50. What do you think?

They’re a bit more expensive but I’ll get more out of them I believe.

There aren’t a ton of options at that size that are passive, it’s a small market obviously and it seems like it’s either super cheap and bad and/or outrageously expensive.

Cambridge Audio SX50 sound great and are smaller than average bookshelves, might still be too big.

They also make the Minx Min 22, this one I haven’t heard though but it’s definitely the right size and under budget.

If you feel like hunting around audiogon/craigslist/usaudiomart you might be able to find something better. The PSB Alpha LR1 was great. Realistic Minimus 7’s are legendary and with a little tweak to the crossover are surprisingly great.

Edit to use this format:

Your post has been removed after it was reviewed by a moderator.

Something was wrong with your post so we decided to remove it.

Feel free to contact the mods about the details as to why we got to this conclusion and to ask what you can change/improve to get it approved for this subreddit.

Oh sorry, it’s hard to not go all jargon-crazy sometimes.

So studio monitors are designed for mixing audio, as such they’re designed to be very very accurate. The flat response means if you plot a line representing all the audible frequencies from bass to the highest treble the line would be flat, so no boosted bass or lowered midrange or any of those things people usually fiddle with knobs to do. Just dead accurate, which lots of people think they want until they hear it, mids and highs can get a little tiring to listen to and is sometimes considered not a “warm” sound.

B&W is Bowers and Wilkins, a very good brand and I just meant find some from the 1980’s because they crop up for sale used from time to time and sound great (check craigslist for B&W, Mission, Elac, Mirage, PSB and Wharfedale). Other options that aren’t used would be Cambridge Audio SX50’s, Elac B6.2’s, and Wharfedale Diamond 210‘s. (Tons of reviews of all of those out there) As for an amp, the SMSL SA50 is plenty for most people for normal listening levels.

As for a DAC, you wouldn’t necessarily need one for active monitors, but you would definitely need some interesting cables like these shitty ones. One of the advantages of pro-audio gear is they use balanced audio signals which makes long runs of cable safe from electromagnetic interference/noise/hum, most people don’t have runs long enough for it to matter in their house but they look cool and “pro”. Also to actually have a balanced signal going through those XLR cables you need a balanced output, which is where a DAC with balanced outputs or volume controller would come in. Here’s a cheap ok controller.

Speakers – I’ve never heard the B6 in person but by all accounts they are pretty much the same as the B22 with a better low end. This advantage is negated by using a sub IMO. I think you would be better either picking another set of speakers or putting more money into the sub or amp. Some speaker options would be these: Cambridge SX50 $200, Polk S15 $230 and KEF Q100 $250. The KEF being very on sale and one heck of a deal.

Amp – While decent I think I would go with an AVR if you’re upgrading. Why because you get more control over your speakers. You can cross the mains and the sub so they blend better and you don’t have to do it manually by ear. You also get room correction and digital inputs. Pretty much any AVR would be decent but if you are ok with refurbs you can save money or get a much better unit for the same amount of budget.

Sub – I’ve not heard the Elac sub but I know the Dayton isn’t that bad of a music sub. If you want to upgrade I don’t know that the ELAC would be that big of an upgrade. I think I would consider the BIC PL-200 $300 currently on sale.

What if I swap the speakers with a pair of Cambridge SX50? Or for the Tannoy Eclipse 1? or for a MONITOR AUDIO MR1

Are these ok for entry-level?