What is the opinion of Reddit about the
Califone 2810-PA Listening First Kids Stereo Headphones, Panda Design, PC and Apple Compatible? 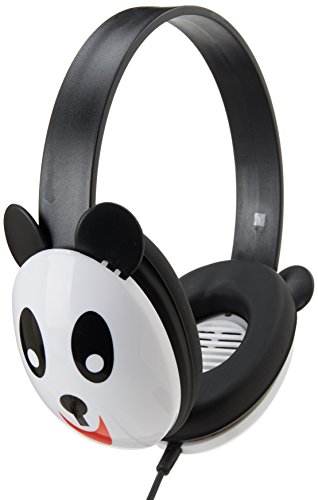 Happy to help. A lot of the advice above still applies (diapers, clothes, new toys, tylenol, etc) but there are some additions.

If he has his own seat, he gets two carry-ons: a small wheeled bag that has some toys he picks out plus a backpack that you put snacks in. I highly recommend these being light enough that you can carry them when he inevitably gets bored of lugging them along himself.

If he doesn’t have his own seat, just a small backpack with toys that he has picked out that you can claim as your “personal item” in addition to your carry on. You’ll have to put snacks in your carry on.

For snacks, I usually pack a sandwich that doesn’t need refrigeration, typically peanut butter. I have had luck with a ham sandwich as long as it’s packed right before leaving for the airport and is eaten sometime in the next few hours. I also throw in some various favorite snacks that come in lots of pieces – fruit snacks, goldfish, raisins, apple slices. Frozen yogurt tubes and applesauce packets are also good but you have to declare them when going through security. As long as you say it’s for the kid they’ll let it through with a little extra probing. It might be worthwhile to stash some treats that your kid loves but doesn’t get often in your bag as well, perhaps a small bag of m&m’s or a lollypop. These are bribes to be used when nothing else helps calm a meltdown. I haven’t had to use these myself yet but I always bring them and have even offered them to other parents when needed.

In addition to snacks, bring a glass with a lid and straw then buy some milk or juice in the airport. This is to be given initially at take off to help pop ears but it’s useful the entire trip.

Pack a small blanket with a snuggly toy. It helps if this is something they usually have but it’s ok if it’s just whatever you can fit in the bag.

Bring some sort of electronic device that has games/apps and movies/tv shows preloaded. This is worth it’s weight in gold. For headphones, I’ve found these ones are great for little kids. Apps that they’ve never used but relate to favorite characters are the bomb (Daniel Tiger, Dinosaur Train, Jake & the Neverland Pirates, etc), plus free fireworks and piano apps are also good time killers. A variety of movies/tv including those they watch all the time and new ones is perfect. There are also animated/narrated book apps that are great, kinda like this one. Search for Oceanhouse Media and you’ll see all the ones they have.

Buy a new coloring book and crayons. Helps if the coloring book also has some stickers. If you don’t trust your son to not color on everything, get one of the crayola color wonder sets. If you go the traditional coloring route, make sure you get the ultra washable type for everyone’s sake.

To help kill energy before getting on the plane, make the airport your personal gym. Have your son run up and down staircases, run the wrong way on moving walkways (when empty, obviously), do suicides from one end of the gate to the other, climb up and down chairs, whatever you can come up with. Burn off as much energy as humanly possible before getting on the plane. You will get looks from other people but who cares – you’re making yours and everyone else’s plane trip that much easier.

If you haven’t managed to wipe him out enough in the terminal, you can do trips up and down the aisle on the plane. Point out everything, have a chat with the flight attendants, do laps. If you stop make sure it’s near the back of the plane because regulations blah blah no hanging out at front of plane, even if you’re 2. Depending on the airline, sometimes they’ll let you chill near the back galley. Lots of stuff for kids to look at and ask questions about. Might score some free snacks as well.

I will reiterate from above: a drink for you if you drink. That one glass of booze helps take the edge off, gives you a second to breathe, and helps mommy not have a melt down. Hell, some flight attendants will hook you up if they see you’re doing everything in your power to keep your kid entertained.

If you’re lucky, you’ll wipe him out enough that he’ll sleep on the plane. If not, you should have tons of tools at your disposal to kill time.

I apologize, as I don’t know how to embed this as a link, but I have these for my 2 year old and they’re great:
http://www.amazon.com/Califone-Kids-Stereo-Headphone-2810-PA/dp/B000M5GS7M/ref=sr_1_5?ie=UTF8&amp;qid=1358467499&amp;sr=8-5
They’re not adjustable size-wise, but they fit on her when she was a baby, and I can get them on my head. They also have a volume adjustment on the cord that gets ignored by toddlers.