What is the opinion of Reddit about the
Breville BES840XL Infuser Espresso Machine, Brushed Stainless Steel? 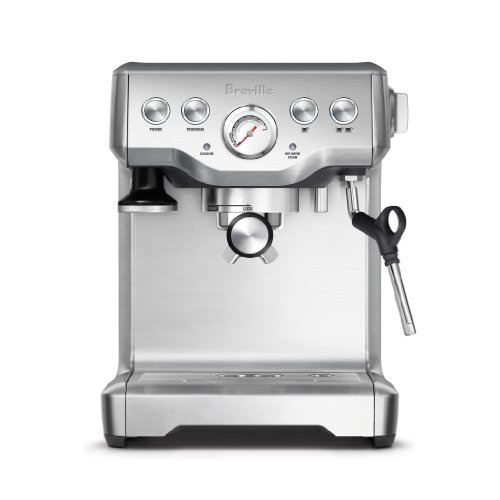 Always start with foreplay, and go from there. It works wonders. 😉

Now in all seriousness, I use the Breville Infuser, which you can snag on Amazon right now for $500.

I like to consider myself a bit of a coffee snob, but maybe not by a majority of this subs standards. Before I got this, I was spending over $200 a month at my local coffee shops, and now I’m well under half of that (well, at zero cuz of the Coronavirus haha).It has worked well beyond my expectations, and paired with a good grinder, it will work very well. I definitely plan to upgrade machines in the future, but it serves as an amazing starting machine.

I know this model is usually ~$500 new, but currently Amazon has the stainless steel model on sale for $428 shipped. For someone in the MA area that can pick it up this is a pretty good deal, but with shipping costs this probably isn’t worth it for most.

It’s spendy, but so nice to be able to make your own fancy morning drinks. I don’t even want to buy coffees because I can make my own perfectly. (Not to mention that we’ll quickly be saving money with how often DH and I used to spend on coffee. After ten weeks it will all be savings).

The Breville Infuser is under $500 and has a solid steam wand; not as powerful as the Silvia, but still strong enough to produce microfoam as well as incorporating it into the milk for that proper “wet paint” texture.

Of course, also pulls solid espresso shots as long as you have a good grinder like a Preciso or Rocky.

I got the Breville Infuser and Smart Grinder Pro from Amazon a couple of weeks ago. I love them. By no means am I an expert, but I enjoy the shots I pull just as much as from coffee shops using La Marzoccos. Yes the beans, barista, and placebo all play into that, but it still pulls a great shot and is pretty affordable. You could even go cheaper and get the Duo Temp Pro which could functionally be the same as the Infuser and is $100 cheaper so you could spend it on cups, knockbox, distributor but the infuser would still put you under budget. I went with the infuser because you can adjust the temperature and you can pull manually or preset volume, which allows you to eliminate that variable for a consistent shot and you can see how your tamp/grind are as the program pulls 60mL (2oz) no matter what and so you can gauge what you need to do to dial that volume in for the proper extraction time. Downside is that if you want a naked portafilter then you gotta DIY or buy one from Aus for like $150, but I don’t think it’s a huge deal and if you do then maybe that’s where your extra budget could go. The pressure gauge is also nice although it won’t really tell you what you don’t already know from extraction time.

I can’t say this is the best machine for the price (although Seattle Coffee Gear did so take that as you will) but I can highly recommend it. I would get it over the Barista Express as the extra $50 for a dedicated grinder is totally worth it as it is more versatile and I’ve heard it’s a better grinder than the built in one. I also recommend it over the Gaggia. Although it does not have the modabilitiy of the Classic, it has most of the features that people mod the Gaggia for already, plus it uses a traditional steam arm instead of a panarello like the Gaggia, and has stainless steel lined thermocoil instead of aluminum thermoblock.

Overall would definitely recommend going separate grinder and machine no matter what.

fancy vacuum for the house/car

If you’re interested, you can get a used (most likely just a return) from Amazon Warehouse for $406

Here are a couple good ones that make a good espersso and cappuccino
https://www.williams-sonoma.com/products/delonghi-dedica-deluxe-espresso-maker-stainless-steel/?catalogId=79&amp;sku=3579062&amp;cm_ven=PLA&amp;cm_cat=Google&amp;cm_pla=Electrics%20%3E%20Espresso%20Makers&amp;cm_ite=3579062&amp;gclid=Cj0KCQjwi7yCB…

I have the Delonghi and my wife and daughter love it.

What do you mean the Infuser isn’t available on the market anymore??

I have a Baratz Virtuoso which can do espresso it is only $250. The Vario would be better but, that was $500.

Breville is a pretty good brand and I have read that the above is one of the best you can get in the sub – $1000 price range.

Sure! I got it last summer so it’s probably an older model, Breville Infuser Breville BES840XL/A . https://www.amazon.com/dp/B0089SSOR6/ref=cm_sw_r_cp_apa_i_cn2lFb0HSE3ZR

I don’t know if you have something against Breville, but the BES840XL Infuser is a really solid machine for under $500, heck, even under $1000 (speaking as an owner who’s had it for over 2 years).

Unlike a stock Silvia, it has a built-in internal PID that regulates steam and brew temperatures, so you don’t have to do any surfing. The transition between steam and brew is less than a minute.

It can candle any coffee I throw at it; I’ve used beans from 49th Parallel, Matchstick, JJ Bean, Heart, Phil & Sebastian, Ritual,… I’m currently pulling Social’s Ethiopia Sidamo Ardi on it and I got a perfect 18g dry/30g wet in 30s extraction on my very first try dialing it in (currently sipping on an Americano I made with it as I type this)!

If you need to service the machine for any reason, ECM in North Burnaby are authorized Breville service techs.

I’m also using a Preciso grinder, which is essentially a Virtuoso with micro-adjustments, and only use the single-walled (non-pressurized) double espresso basket.

Its steam power isn’t bad either; I can steam enough milk for a traditional cappuccino in less than 30 seconds, and the milk is texturized enough to pour latte art 😉

An aside on the grinder: If the Virtuoso doesn’t give you the adjustability you desire, keep your eye on the new Sette 270/W, which replaces the Preciso lineup. Mark Prince (CoffeeGeek) has been posting his initial impressions of the grinder on Twitter and so far seem very positive.

Why a hand grinder? Why not an electric one? I find the latter to be a lot easier to dial in because hand grinders typically can’t get as precise.

Speaking of which, I use a Baratza Preciso + Breville Infuser combo, which worked out to a little under $1K. I love the Preciso because it of the micro-adjustment settings, which breaks down the 40 macro steps into an additional 1 steps each; the difference between 2 micro clicks can mean 2-3 seconds’ difference in extraction time.

Furthermore, Breville just announced its new grinder the Sette 270/W, which is the spiritual successor to the Preciso (meaning that the latter will be found for cheaper near in the future)

For the espresso machine, the Infuser is more feature-packed than the Silvia (integrated tamper, programmable buttons, pre-infusion), but the Silvia does have the advantage of having a programmable PID (opposed to the Infuser’s static, internal one). That being said, you’ll still need to learn temperature surfing for the Silvia, whereas the Infuser regulates the temp difference on its own.

yikes, ‘not great, still usable’ for $500 sounds risky and a loss. I would buy a brand new Breville Infuser with that $500