What is the opinion of Reddit about the
Bossi 104 Keycaps Set, Doubleshot PBT Backlit Keycaps OEM Profile for Mechanical Keyboard and Keycap Removal Tool (Pink+Purple+Blue)? 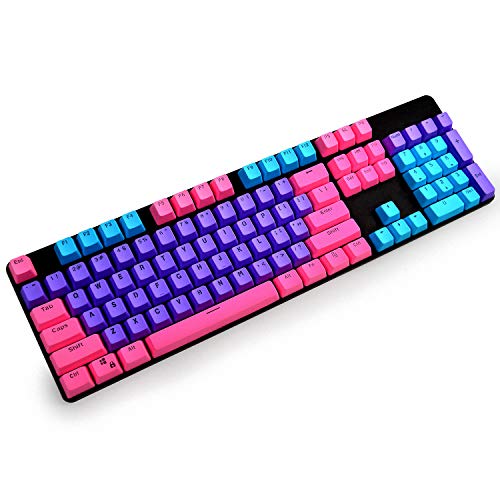 Hey all. Just wanted to drop my keeb in here. Had some unexpected repairs come up for my car that has had me down all night, so I wanted to share this thing that still makes me rather happy with y’all. There’s not much to the keeb, but I really, really like it. Specs:

I really love the Boba U4 switches. I have had a Rosewill with mx blues for years and years, and I was all about them for a bit. But they’ve gotten to me a lot recently, and I just wanted to do something basically the exact opposite. I had gotten a cheap Velocifire keeb from Amazon to try out browns, just to get a feel for tactile. I wasn’t a huge fan of that keeb, but it gave me the input that I needed. After doing a few weeks of searching around casually in this sub, and after looking into some reviews of the Boba U4, I knew they were what I wanted. They are perfect for me, honestly. It’s really nice that the Rakk Lam Ang Pro is hotswappable, but I don’t know what other switches I would even want to try out. I also won’t be looking into anything new for this for a while, anyway.

The little surgery I had to do, though. The left stab was a bit wonky. I didn’t notice it until I had fully assembled the keycaps. Gazzew was wonderful and had put the switches on the board for me before shipping it to me. After sitting down to do some test typing, I noticed there was a really strange sound coming from the left side of the spacebar, which is where I normally hit it because my left thumb is always what I use for the spacebar. I take the spacebar off, and well… A piece of the stab comes up with it, stuck! After doing some investigation, turns out a small piece had busted. Well, no big deal… I haven’t ever done anything with keebs before, but I’ve disassembled laptops and the like. Can’t be too hard. So I get it all apart and put the stab back together. All good as new. No weird sound.

I’ve had it for a little while now. Maybe a week and a half or so. I’m loving it. And yeah just wanted to share.