What is the opinion of Reddit about the
Audio-Technica ATH-SR50BT Bluetooth Wireless Over-Ear Headphones, Black (ATH-SR50BTBK)? 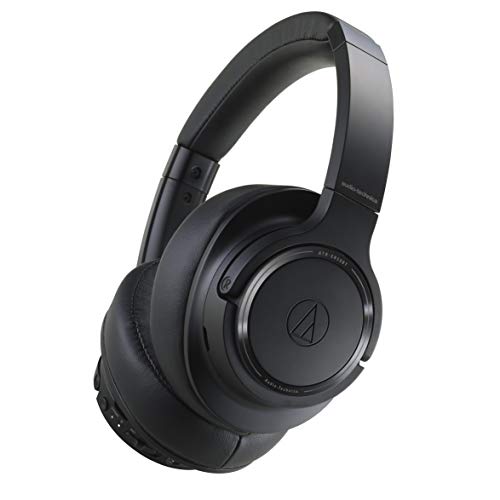 Why not try another brand like Audiotechnica or Beyerdynamic whose products are more geared towards hi-fi audio?

Edit: I would like to explain my reasoning. So why do we want to own high quality, expensive over ear headphones? For me the answer is sound quality. And what is active noise cancelling? It’s a feature. When buying any expensive audio item I would first look to a brand who specialises in my main concern, here the sound quality and possibly build quality, and then see if that brand with a proven track record has some models with good implementation of the generally optional feature, here active noise cancelling. Doing it the other way around you’re likely paying the majority of the msrp for a heavily marketed feature set. It may be well implemented, but you’ve no assurance that the core component, so audio and build quality, received much investment in terms of research and development. The money for production most likely went towards perfection of the special feature (ANC) while the driver and tuning were more of an afterthought given a restricted MSRP.

To me that’s like purchasing a low end car with a spoiler and nice lines, and a lot of cool tech features in the cockpit, but without the investment in actual parts and the necessary r&d to allow it to drive well and fast.

There are many, many quality over ear Bluetooth headphones available today with active noise cancelling. I’m consistently amazed that the Sonys and the Bose are such a hot topic in these forums. Without their objectively decent ANC they’d have trouble beating (wired or via bluetooth) even an Audiotechnica m40x in terms of sound fidelity, and that’s a 7 year old ~$80 starter headphone.

I would recommend these:

I have a pair and they sound great and have noice cancellations and the battery life is really good.

With your explanations, I would suggest an ATH SR50bt. its a comfortable over ear headphone, it has touch controls(although you need to get used to it first. lots of people said that the control is hard to use but for me I had no issue of it), can be folded for better storage, has 28hr playtime for the battery, use a micro usb for charging too and can use audio jack cable incase you ran out of battery or want 0 latency for gaming use, has an ANC feature although I thinks its better to say it as a Noice Reduction instead of ANC, it does toned down some ambient noice but just a little. it also has a hear through feature which allows you to hear someone talking or your surrounding without the need to remove your headphone it will toned down your music right away when you turn on this feature.

I just got mine yesterday and I also made a post before asking about which headphone should I buy(between a 2ndhand Sony XM3 and SR50bt), lots of people recommending me a Bose QC35 ii but I couldnt find one on my local audio shop to test it out. Then I just go with SR50bt because it suddenly went on sale on amazon! which make this a really good deal(from $199 into just $129): https://www.amazon.com/Audio-Technica-ATH-SR50BT-Bluetooth-Wireless-Headphones/dp/B07MC1G7TY/ref=cm_cr_arp_d_product_top?ie=UTF8

And guess what. the sound is amazing!!(wasnt that surprising for me because I have tried ATH MSR7, M40x and M50x before) it has a nice clarity and I could hear all the details I used to not hear on my old Marshall major ii bt. But this headphone is not for a bass head at all, the bass is presentable at a low thump for me and thats enough because the overall sound lean into more neutral or balanced, although I personally think that the treble is a bit higher for my liking. But again I think thats because I’m used to my Marshall major ii sound signature which has a slight boost on the bass that kinda toned down the treble mildly.

If you are more into a casual bassy type but still want a pretty decent balanced sound, I would suggest Marshall major ii bt. the bass is not that overwhelming but its enough to give you those ‘boomy’ feels in your head. its around $80 now but it is an on-ear type of headphone which make it look so tiny, so you will start to get tired when you use it around 2.5hr+ even tho the cushion is super soft, the battery is superb, will give you around 30hr, it doesnt have ANC but it does have a little tiny knob which is really easy to navigate your music volume and next/previous song. I have this headphone since 2018 and its still sounds good, but it just look ugly now on the headband part because all the leather already tattered lol