What is the opinion of Reddit about the
Audio-Technica ATH-M50x Professional Studio Monitor Headphones – Black with FiiO E6 Headphone Amplifier? 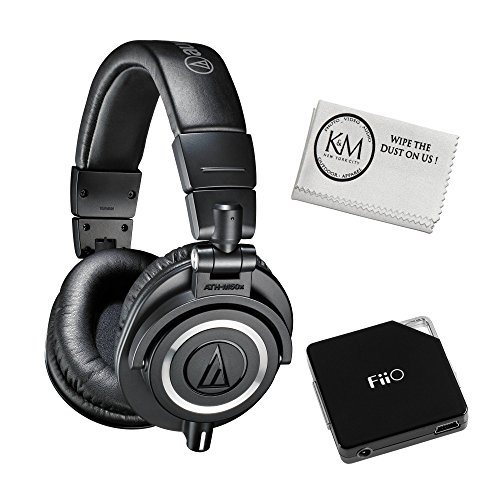 They’re monitor earphones, so they emphasize neutral audio without enhancements. My pair came with a portable DAC that boosts the bass and some of the mids. They sound fantastic. During office hours, often people have to wave in my face to get my attention.

First, here’s a frame of reference for what I was seeking in the first place. If your own criteria diverge from these, then whatever I got won’t be relevant to you. Also keep in mind that some of the models listed at the time have been discontinued by their manufacturers. too.

Anyway, I ended up getting this headphone-and-amp bundle from Amazon, which included a set of Audio-Technica ATH-M50X headphones with a FiiO E6 amp. At the time, it was US$170, though now it’s down to US$149.

I might have made a different choice if one option I was considering hadn’t had a ~$50 price jump between the time it was recommended and the time I decided to make my purchase. That said, I’m mostly happy with my pick. My headphones seem sturdy (though I’ve had them for less than two years, so take that with a grain of salt in the context of BIFLness). My main issue at this point is that I wish the headphone cushions were a bit softer and/or deeper, since they can get a bit uncomfortable—with the driver resting directly on my ear—given that I’ll wear them several hours a day.

The cable appears to be custom, which is fine for now (I will be getting a desktop mic or ModMic). The price seems a little high, is this a good deal? (10 dollars more than the cans themself)