What is the opinion of Reddit about the
ART HeadAMP4 Eight Output Stereo Headphone Amplifier? 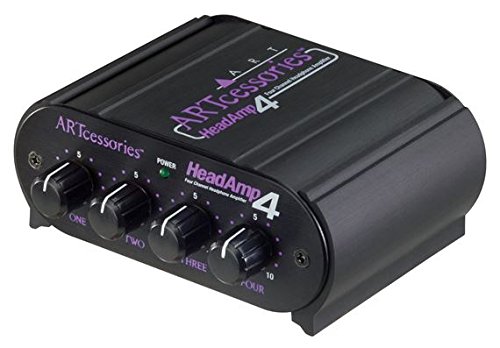 Thanks for the response! You’ve given me a lot to consider.

Something crucial I didn’t know but realized last night while trying different settings on my audio interface: the sound on the computer is output to the audio interface, so i can monitor through the headphone jack on the interface and get both the local and remote voices in there. I really like the sound and gain of the H6 preamps, so if I had to record this weekend, I’d use H6 in combination with an ART HeadAMP4 (or similar) so everyone on my side could monitor.

I’d record the mixed output track to zencastr and if that sounds fine, I’d use that, but also record the individual tracks to the H6 as backup or just if I wanted a track not touched by Chrome’s auto-gain. In this case I’d use the zencastr track for syncing.

I’ve considered having multiple laptops as a solution, but don’t want to require guests to bring computers or have a second computer dedicated to running zencastr.

Oh. That’s annoying. You might be able to get away with using something like a headphone preamp though.

> I had read the Audio-Technica were either USB or XLR input. Does the USB effect the XLR or is it still just not as good? The mics you posted look great but will add about $240 in the mic department for the three of us. Granted, if that’s what we have to do I think we would be good with the investment.

I’ll clarify a little on the USB / XLR mic point. With any device, especially one that’s low-cost (and a $50 mic really is a very low-cost mic), the manufacturer has a finite budget to put towards each feature or component within it. If we say that that $50 mic has $25 worth of components, the distribution of that is maybe around $10 for the housing and connectors, $10 for the parts necessary to give it a USB audio output, and then maybe $5 for the actual microphone, and the parts necessary to make it work. That’s going to give you a poor quality USB audio output (iirc, it’s only 16bit 44.1KHz, which is fine for a mastered output format, but very poor for a working format), and a poor microphone. Get a mic which doesn’t have USB output however, and that $10 worth of USB audio circuitry can be put into the mic, giving you far better sound quality.

> I am not sure how I planned on hooking them up, that’s a good question. Would I use a headphone amplifier for that?

> Hmm, that is an interesting solution. I do have an older laptop that has Win 7, not sure on the CPU, though. Most of my experience has been with video editing and rendering, so I guess I assumed that audio would be more demanding like that. Is that not he case?

Audio is very easy on the CPU. If the system can support Win7, it’ll have no problem capturing three channels of 24bit 44.1KHz audio. Applying effects in post (noise gates, EQ, compression, etc) will increase the CPU load, but anything built within the last ten years should be able to handle it without breaking a sweat. The worst case scenario is that your old laptop will struggle to process the effects on all three tracks in realtime, but if that’s the case, there are ways to economize, such as by freezing tracks, or using more efficient (or less convoluted) effect plugins.

> Is there a 4 mic audio interface you would recommend?

None I’m familiar with, I’m afraid. However, my experience with my Focusrite Saffire Pro 24 would push me toward Forusrite’s Scarlet 18i8, although I appreciate that one might be a little above your budget. Presonus’ Audiobox 44VSL might be a bit more budget-friendly.

And yep, glad it helps. And please do send me a link to your podcast when the first one’s ready. They really do make the working day go by so much better.

Ok, am going to attempt this tonight. Two people recording on my side, another remotely.

My setup on the side with two people recording is as follows:

Will report back tomorrow.

Following your link I also found one of these and I do have mutliple computers so I think I will get this one.