What is the opinion of Reddit about the
Akko Carbon Retro 158-Key ASA Profile PBT Double-Shot Full Keycap Set for Mechanical Keyboards with Collection Box? 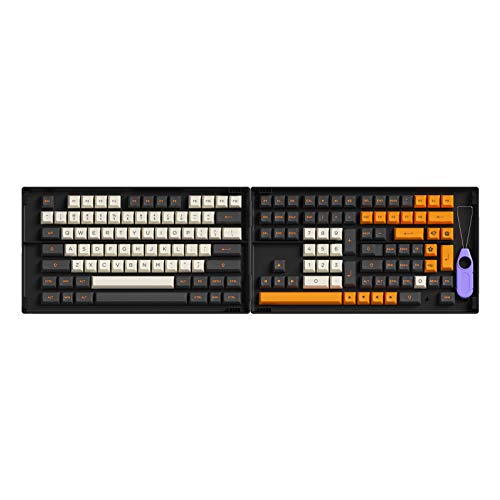 I wanted to try a different sculpted keycap profile. I love my cherry profile keys. MT3 and SA were too small/sculped for my liking. These ASA profile are somewhere in the middle between the cherry profile and the MT3/SA keycaps and I’m a fan.

They’re wider than a cherry but not as deep. They curve in both directions but not as cupped as SA or MT3. Double shot PBT and slightly taller than cherry so more weight. Cherry MX D key is .82g while the ASA D key is 1.25g.

The Akko set comes with a very full count of keycaps so most keyboards should be covered. I plan to get 2.25 and 2.75 DSA profile space bars from pimp my keyboard in colors I’ve yet to determine to match the gray or orange.

Overall happy with this set and will keep as my daily driver for a bit.

Switches are Glorious Pandas with 65g springs, lubed and filmed. Keycaps are spare AKKO carbon retro ASA (a clone of the SA carbons)

Firmware is via QMK, a slightly modified version of ghostseven keymap. I swapped the direction of the page up/down on the right hand rotary encoder.

I’ve told myself for years that I am just not good enough to solder, my hands shake too much, and that I’d just mess it up. The soldering guides that were posted to this sub a week ago gave me the confidence to try it, and while the soldering job isn’t particularly pretty, I didn’t create any shorts, and everything connected correctly!

I’m going to change the keymap a bunch when I get time, probably include a set of hyper/super/meta keys for Linux and Emacs.

If you’re thinking that you can’t solder, that you’d mess it up, give it a try!! There are soldering practice kits on Amazon that you can use to git gud. I believe in you!

Definitely recommend some thick PBT keycaps to start with. And form mod will help with the hollow sound also.

So I love my Keychron K8 with Gateron Browns. Compact, but has the keys I need and put’s ‘em where I like ‘em. Feels like my Alps Salmon-equipped vintage Apple keyboards (of which I have many). Not that loud. The 3-device Bluetooth connectivity works well for me and I use it all the time. The keycaps are PBT Akko Carbon Retro with an ASA profile, which feels like the VT100 terminals I grew up with. But every so often, I have lots of data entry and I miss the numeric keypad, plus I play a lot of flightsims which use the numeric keypad, and some extra macro keys are useful in those situations too.

Thus, a vertical Gherkin numeric keypad/vertical macropad to the rescue! I’ve rebuilt – many – vintage – flightsticks with Pro Micros this past summer, and I had plenty of spare Akko Carbon keycaps, and so I thought I would give the Gherkin kit from SMKeyboards a whirl as my first homemade. I found two great videos on the QMK Configurator and the QMK Toolbox on YouTube, and they were all I needed to make a multilevel keymap and then flash the Pro Micro. The bottom orange Paw and Star keys act as two different modifiers going to four different levels. The Orange F7-SL keys on the top right are F1-F4. The Gray CAL is the keypad Enter. Clicky Gateron Blue switches are installed in the conventional orientation, and the keycaps are just rotated 90 degrees – it works fine for this combination of switches and caps. Most of the time, the Gherkin will be used by my left hand next to my throttle, so the Function key columns climb from right to left, and my left thumb will hold down or press the Paw and Star keys as a “shift” while my other fingers tap the keys. At least, that’s the plan. For data entry, the Gherkin is on the right. And during video editing or other heavy macros usage, it’s on the left.

Extra tall rubber feet at the rear set the angle to my liking, but I was concerned about the Micro USB port snapping off the Pro Micro with repeated use, so I thought I would try those “magsafe-like” Micro-USB cables instead, thinking the magnetic head would break away instead of the USB port on the Pro Micro. Most of these “magsafe-like” cables are charging-only, but I found one that does data with hundreds of good Amazon reviews. I still expected it to be trash and not work, but I’ll be darned, it works great every time, and has the exact gentle breakaway characteristics I was hoping for. Highly recommended.

The Plan is to keep it disconnected and in a drawer until I have a big data entry or macro task, or I am flying in a flightsim. I think it integrates into my HOTAS stuff pretty nicely, though I am tempted to make another one using game controller firmware to just make a 30-button game controller with reledgendable keykaps – we’ll see how this one goes first. Thanks to /u/EEvanCondron for inspiration.

Akko Carbon Retro ASA Profile, got them on Amazon:

Thanks! I was planning on building a keyboard soon with these keycaps: https://www.amazon.com/gp/product/B08X4TTMKR/ref=ox_sc_saved_title_1?smid=A2D2ZUZD9IEPI6&amp;psc=1

I decided that I would start by making a matching cable for my headphones to bring the whole theme together.

According to amazon they are asa profile. This set: https://www.amazon.com/gp/product/B08X4TTMKR/ref=ppx_yo_dt_b_asin_title_o04_s00?ie=UTF8&amp;psc=1

if you don’t care about shine thru .. these are a little more expensive but much much better: https://www.amazon.com/gp/product/B08X4TTMKR/ref=ppx_yo_dt_b_asin_title_o01_s01?ie=UTF8&amp;psc=1