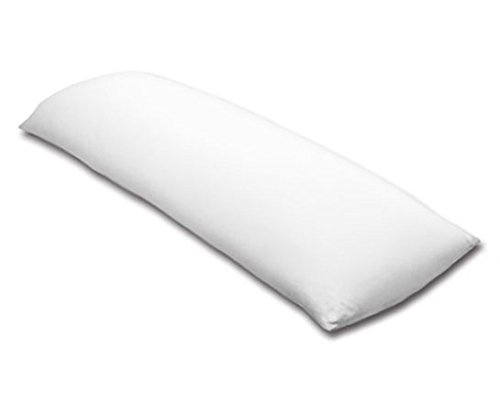 Only the cover. If you want/need the pillow, you’ll need to buy one. A 20″x60″ body pillow should work okay for a 150×50 cover, but depending on how much money you’re willing to spend for quality, the DHR6001 is the best 150x50cm pillow intended for use with dakimakura covers. You can get it off Amazon Japan for $117.38 shipped to the US (Amazon JP will ship it internationally, has English pages, and English support). Personally I find it as a worthwhile investment if you sleep with the thing daily (I’ve had my DHR6000 for over 3 years now), but a lot of people are uncomfortable with the idea of buying a $120 pillow. ^^

Also, feel free to join us over in /r/Dakimakuras. I post a lot over there (because I also help run a dakimakura store) and the community is pretty helpful and open to common questions like these.

Well, it’s supposed to be 150×50 cm, but unfortunately, she didn’t really choose the best printing service; ignoring the disappointing stitching, I just measured both the Kanna and Rem dakis at 144×46 cm. I haven’t tried putting either of them on a pillow yet, but I have another one of the same width, and she was a bit “feisty” to put on. I would probably suggest removing some stuffing from the pillow and saving it in a plastic bag if you attempt that.

Anyway, you’re like me when it comes to the pillow sizes~ I don’t know too much about the <6k numbers, though I think the 5ks are hypoallergenic or something. However, the two ones you’ll typically want are DHR6000 and DHR6001. The former is 160×50, and the latter is 150×50 (which I happen to have two of). So, while you could get the 6000 and remove a bit more stuffing than normal, I’d suggest the 6001 to start: https://www.amazon.co.jp/dp/B00PIM8OTO

The DHR 6001 is 150 sized. Most people here seem to suggest just buying a DHR 6000 and removing some stuffing when you want to use a 150 cm cover. I believe amazon stopped shipping them internationally, so you’d have to use a proxy or a forwarder.