What is the opinion of Reddit about the
Acne Face Wash with Benzoyl Peroxide by the makers of Differin Gel, Daily Deep Cleanser, Gentle Skin Care for Acne Prone Sensitive Skin, 4 oz? 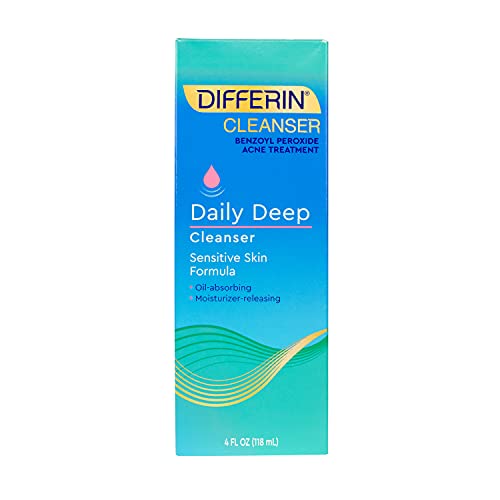 That cleanser was my holy grail for years and years! I was so upset when I saw it was discontinued. A couple weeks ago I started doing research on other cleansers that use benzoyl peroxide and I ordered this differin one. I’ve only been using it for about a week but I really like it! The price is almost the same as Neutrogena rapid clear, I think it’s like $2 more. There’s a bit less benzoyl peroxide which is still fine for me, and the texture has a really fine grit to it instead of being smooth (so I have been avoiding rubbing it in too harshly for fear of irritation). Other than that I like it, and if my experience continues with how it’s been going I think I’ll stick with it.

I don’t think my link is working and I’m not on here enough to know exactly what I did wrong. The cleanser I’m referring to is called differin daily deep cleanser sensitive skin formula and I bought it from Amazon

Just curious if you ever tried a benzoyl peroxide cleanser/wash as well? I was in a somewhat similar boat when it came to my chest/back – salicylic acid cleanser and Steidex max strength pads made a bigger difference than the shampoos, but still wasn’t fully clearing anything by any means (Nizoral made a night & day difference the first few times I used it then after that nada). Even if I used the SA cleanser first and followed immediately after with a pyrithione zince or selenium sulfide shampoo (letting both the cleanser and the shampoo sit on my skin for many minutes each/separately), it wasn’t fully clearing.

Terbinafine cream has been the main anti-fungal treatment that has consistently and continually helped both my face and chest when used in conjunction with the right products. I tried all of the other ones including clotrimazole and everything everyone else swears by and they did nothing. Also read that Terbinafine tends to be a better choice b/c the yeast/fungus doesn’t build immunity against it like all the other ones (that’s what happened with nizoral for me – it quickly built immunity and stopped working, which is very common with ketoconazole). Also, I personally have very sensitive, acne-prone skin as well as truly hormonal cystic acne, and have never found the creams to be comedogenic (i use them on my face).

When I went to the derm he said for those areas to use whatever benzoyl peroxide cleanser I wanted to (and leave it in for a few mins before rinsing). He confirmed it is indeed folliculitis/malassezia – the description you previously gave sounds identical to mine as well. This is the main reason I am asking if you’ve ever tried BPO given the few similarities I noticed in your other comments). I was skeptical (b/c I had completely forgotten or overlooked that BPO is in fact proven to actively fight it) but changing to this type of cleanser made an immensely bigger difference than the salicylic cleansers, antidandruff shampoos and creams and anything else I’d tried on the folliculitis/malassezia on my body, though I am considering getting a different one now now with a higher %age of BPO. I have been using Differin Daily Deep Cleanser 5% BPO. It’s also 100% “malassezia safe.” Just fyi/PSA – it is NOT intended to be used in conjunction with the Differin adapalene gel (wasn’t an issue for me as I haven’t used the cleanser on my face, and haven’t used the gel either way, face or body).
The reason I am considering upping the %age of BPO cleanser is bc the cleanser alone no longer works on as far as truly clearing up my chest – I have to also apply Malezia’s leave-on BPO treatment when I get out of the shower to keep it 100% clear. (only on my chest, not my face, as I am tackling that differently due to the combination of issues going on with that area). Anywho I’d like to be able to just use a cleanser and not continue to purchase the Malezia for a couple of reasons I won’t bore you with, therefore – seeking higher BPO.

For what it’s worth, before seeing the dr, when I first started using an SA cleanser on those spots it was the CeraVe one. (I personally also can’t touch anything Neutrogena, so no experience w/ the product you use). I figured out at some point that 99% of CeraVe’s products also absolutely destroy my skin. Since then, I have bought the La Roche-Posay Effaclar Medicated cleanser (also 2% SA), and noticed much better results from that one on both face and chest. And my face actually also tolerates it very well when I use it there too, whereas the CeraVe one destroyed my skin even more-so. I know everyone is different/YMMV, though, so whatever works for you! Oh and also Stridex recently came out with a new “face & body” version that has the 2% SA plus grapefruit extract which is also helpful against all of this stuff. The pads are much bigger, plus one side also has a more scratchy/physically exfoliating side and the other side is smooth. They are fantastic for head-to-toe coverage

Also recently found that sulphur cleanser/wash works equally well – Kate Somerville EradiKate Daily Foaming Cleanser w/ 3% sulphur. Its not “100% malassezia safe,” but I just make sure to wash it off really well after letting it sit a few mins. I know $40 may seem like a lot; I grabbed it during Amazon’s deal days for 50% off and was pleasantly surprised at what a huge tube it is, and the very little amount of product that is actually required, even to cover my entire chest & most of my back/shoulders. So many products claim you only need a tiny amount and it’s never true – but with this one it is!! Not to mention my face. I alternate this cleanser in a few nights per week, just to be careful given some of the other ingredients. I really wish I could use it consistently because oh man it leaves your skin feeling soft as a baby’s bum as soon as it’s rinsed off.

I also recently found the De La Cruz 10% Sulfur Ointment at HEB (local grocery store in the south), and used it for the first time the other night for 10 mins on my face and chest and WOW. Next day was amazing (skin looked angry and red when I rinsed it off and went to bed so I was slightly worried but I has read it was normal anyway. Also the smell is barely noticeable, and I have a bloodhound’s nose lol).

Yes these products are very drying. And our skin’s barrier is already disrupted/broken which is a major reason that we have these issues in the first place, so it is actually very important to use other products to help restore your barrier, which means YES you do need to moisture & hydrate your skin, BUT you have to be very careful and use the right ones. If you have only been using the salicylic acid pads and not applying anything after to moisturize/hydrate, then yes ultimately you will end up only exacerbating the issue as well as developing new ones.

Sorry this is so long, and I hope it doesn’t come across as “preachy” or anything in any parts of it because that is not at all how I mean it. OP made very valid, accurate points in their post (from my experience) and I didn’t mean for the moisturizer part to come off as me blasting OP for that, because I’m not. OP is correct – fully moisturized, occluded skin is indeed a breeding ground for this stuff. But if you use the right ones in conjunction with the right products, it does actually help to both get rid of the fungus faster and repair your moisture barrier simultaneously which will help prevent future infections/fungus problems.

I’m no expert, but lots of acne body washes out there! These are some I’ve tried, still haven’t found my forever choice.

$25 Paula’s Choice Body Acne Spray (I personally found the spray hard to use cause you can’t rub in or reach to rub around as well, but reviews say it’s easy to apply with spray. I prefer putting on in shower too, so I opt for a wash)

Use a cleanser with benzoil peroxide once per day – consistency is required. You can up it to two times per day if needed.

Gently pat it dry with a clean towel. Only use the towel 3 times or less before you was it. Don’t use it for anything but drying your face, ever.

Use a gentle moisturizer on your face after gently drying it.