What is the opinion of Reddit about the
350W Space heater, Programmable Wall Outlet Space Heater As Seen on TV with Adjustable Thermostat and Timer and Led Display for Office Dorm Room? 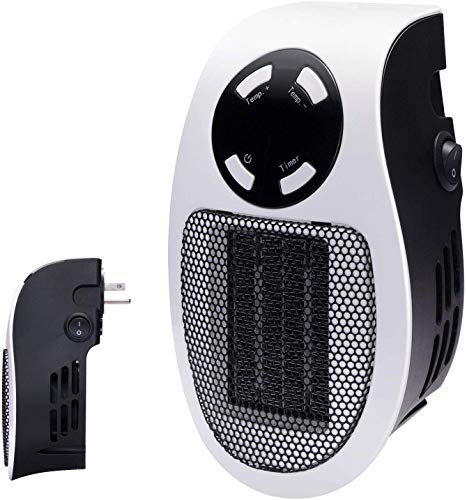 I have a slightly better version of one of these.
400w, programmable from 20 to 45C, I keep it inside the tent and its super stable. It’ll obviously increase your electrical cost but I reckon it’s still more efficient than a regular sized space heater.

> Almost every plug-in space heater made for the US market draws 1500 watts,

“Most” because people shop by power ratings, and “moar iz beter, write?”. It’s fairly easy to find lower power heaters on Amazon, you just search for “low power heater”. You still get some 1500 watt heaters because Amazon’s search engine is a piece of shit, but you also get 350 to 500 watt heaters.

I had this one for a while: https://www.amazon.com/heater-Programmable-Adjustable-Thermostat-Display/dp/B07DCKFJLM and it did what I wanted it to do (again, I only want a small temperature change in my office). However the case design was crap. It won’t stay plugged in.

I can’t speak to office circuits as I’ve only had to deal with server rooms, which are different beasties. However from my experience over 50 years of living in different apartments and houses in multiple states and having the owners, or housemates or whatever do some stupid shit[1], most residential homes have 15 amp breakers (or in one case actual stinking FUSES–this was seen less than 6 months ago).

In my current house my office is fed by a 20 amp circuit (and the wiring appears to be 20 amp) because a previous owner turned the basement into a hair salon (including the sink with the dip for your neck). I dress for the weather, I exercise (when I got down here this morning it was 66 in the office. I’ve started using 2 of the computers (laptops), so they’re throwing off a bit more heat, 2 LCD panels a bit more, and I’m sitting here after my morning run in sweat pants, a fleece sweater and thickish socks. I’m still warm from my oatmeal and my 4 mile run, so the heater is off. In 40 minutes or so I’ll notice that my hands and feet are cold, so I’ll get up and get some tea and a hat. Shortly after that I’ll turn the dial on the heater to give me a little bump.

Heck, I’ve got a bag full of those large bubble packs that Amazon puts in it’s packages. Sometime in the next 2-3 weeks those are going to get piled up in the casement window to block some of the air flow and provide a bit more insulation.

There really is no comparison between what I’m doing in my home office, and what people *generally* do in modern office buildings. I am only trying to heat a 10×12 space, and having the door closed means that my heater runs intermittently. Most people who have this problem in offices work in cubes or open offices, and they’re trying to maintain a tiny bubble of heat.

The problem in modern offices is that there is a collision between the desires of the building owners (usually NOT the business), the business/management, and the workers.

All three groups are generally assholes who don’t want to do anything to mitigate the concerns of anyone on the other two groups.

Dress codes, office layout, cube heights, how the airflow is vented all play a part in this.

Which is to say that for *most* people in the office the heaters are symptoms of other problems (including hypothyroid and type II diabetes).

[1] At one job I worked at in the 90s the people working there had daisychained so many power cords and lights (long story) that the extension cords had melted together. And yes, there were heaters under a couple desks. In their defense, this was a repurposed chemical laboratory space at the Illinois Institute of Technology, so it was a building with a LOT of single pane glass, in a place with cold winters, and different assumptions about airflow.

This would probably work, inside the tent, depending on size. There’s bigger models.